Development Bank must be independent to succeed — Prof. Quartey 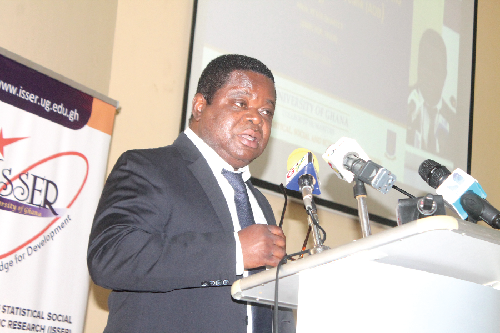 The establishment of the proposed Development Bank Ghana (DBG) will be successful, if it is operated as an independent business, with a competent board of directors and devoid of political interference, the Director of the Institute of Statistical, Social and Economic Research (ISSER), Professor Peter Quartey, has said.

"The bank is going to fill a gap because we need long term financing, however, it will be successful only if certain preconditions are met, including running independently as a business with very competent people on the board," he said.

Prof. Quartey was speaking at a development dialogue organised by ISSER in Accra last Tuesday on the theme: "National Development Banks and Sustainable Financing in Ghana".

He said the government must be guided by the experiences of the country’s previous attempts at establishing development banks and ensure that they don’t collapse just like the Bank for Housing and Construction and the Ghana Cooperative Credit Bank in January 2000 due to financial challenges.

However, Prof. Quartey said, the idea to establish a development bank was prudent and timely because businesses in the private sector required long term patient funding to support big projects, scale up and help revive the economy.

Explaining the rationale behind the establishment of the bank, the Director of Financial Sector Division of the Ministry of Finance, Mr Sampson Akligoh, said the bank would help address the market failures in the credit markets and thereby increase the availability of medium and long-term finance to enable Ghanaians to facilitate economic transformation and job creation.

He said the bank would focus on Agribusiness, with a focus on off-farm value-chain activities, manufacturing, ICT, software, and allied services, including Business-Process Outsourcing, and tourism as well as homeownership mortgage finance.

The bank, he said, would operate as a wholesale and non-deposit taking bank requiring no branch network and a very small staff.

“It will, therefore, be very costly –financially and in terms of closure of branches and employment loss – to try to convert ADB or NIB into a viable modern development bank.

“The advantage of the greenfield approach is that one gets to startfrom a clean slate, with no legacy financial, governance and other issues. This allows us to focus on the future and move straight into setting up DBG equipped with modern and sound design principles,” he said.

He said despite the unsuccessful experience in Ghana and in many African countries, development banks had been instrumental in driving economic transformation elsewhere.

He noted that many industrialised countries had development banks or similar institutions to provide investment finance to their SMEs or to encourage investment in new and promising, but risky economic activities.

“The German Government, through its development bank, KfW, is investing in DBG and providing generous Technical Assistance for the set-up and initial running of DBG. KfW is one of the biggest, most successful, and most respected national development banks in the world having been awarded the World’s Safest Bank 2020 and for the last 11 consecutive years.

“Established in 1948 using (by agreement with the U.S.) Germany’s Marshall Funds loan repayments, KfW has been instrumental in providing investment funds to German firms during the country’s reconstruction and subsequent emergence as an economic powerhouse,” he said.

The managing Director of ADB Bank, Dr John Kofi Mensah, said ADB, which was first established to operate as a development bank before venturing into the universal banking space, was excited about the establishment of the DBG as it would help bridge the existing gap between commercial banking and Ghana’s developmental agenda.

“We are hopeful of the benefit that will emerge from a collaboration between ADB and DBG in helping channel private investments into productive sectors, new technologies and help accelerate market efforts to achieve the sustainable development goals,” he said.

Dr Mensah proposed the establishment of agricultural project incubators across the country where project ideas brought up by scientists, investors were tried and if successful, implemented on a large scale with funds from the DBG.

“After the project has taken off and the risk thereof reduced, funding for the expansion and replication of the projects would be taken up by the ADB and other Banks engaged in medium to long term lending to the private sector,” he said.