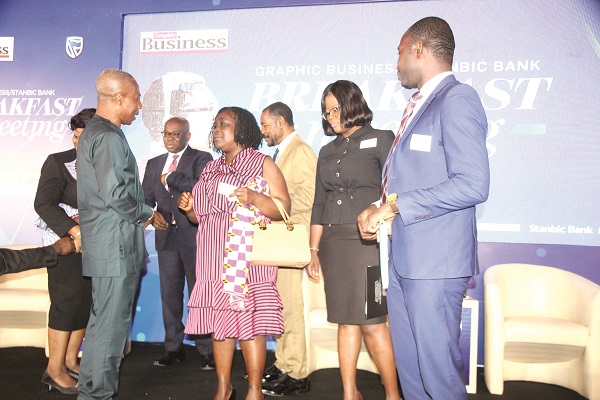 THE President of the Private Enterprise Federation (PEF), Nana Osei Bonsu, has urged the government to introduce bold policies and programmes to de-risk the entire value chain in the agriculture sector.

He said such a move would help the sector to attract the needed investments, expand and create more jobs for the teeming unemployed youth in the country.

The President of PEF observed that although the government introduced the Ghana Incentive-Based Risk Sharing System for Agriculture (GIRSAL) to de-risk the sector, the system only protected the financial institutions which lent to the
sector and not the farmers.

GIRSAL is a limited liability company wholly-owned by the government through the Ministry of Finance and is capitalised with seed funding from the Bank of Ghana (BoG) and the Africa Development Bank (AfDB).

The system was created to provide credit risk guarantees to financial institutions to increase lending to the agricultural sector.

At the Graphic Business/ Stanbic Bank Breakfast Meeting, Nana Osei Bonsu said although this was commendable, there was the need to introduce other policies to de-risk the entire value chain.

“We need to de-risk the agriculture sector to allow individuals to invest in it. No investor will invest in a sector that is seen to be risky.

“Now we have the GIRSAL which de-risks the exposure in the agriculture sector but it only de-risks the banking system, the financial institutions who grant the loans. It does not de-risk the farmer who started the farm before going to the bank,” he explained.

Speaking on the topic ‘Avenues for Job Creation’, he stressed the need to add value to the country’s abundant agricultural produce.

He said it would lead to the establishment of manufacturing companies which would then employ people.

“We have all the raw materials that we need, all that is left is value addition and with the value addition, we need one element that will make it profitable and that is electricity.

“The government’s pricing of electricity is very high which has increased the cost of production for the private sector and made our products uncompetitive on the market.

Also at the meeting, Dr Adu Owusu Sarkodie, an economics lecturer at the University of Ghana, called for a more sustainable agriculture programme which would help unlock the potentials in the sector and create jobs.

He said the Planting for Food and Jobs (PFaJ), despite making some gains over the years, had proven to be an import dependent programme which did not make the programme sustainable.

He said the country must learn some lessons from China, stating that “their first economic module was that no Chinese should go hungry and we need to replicate that and say to ourselves that no Ghanaian should go hungry”.

“The agriculture sector must be emphasised and we shouldn’t joke with it. Ivory Coast is doing better than us because they have taken agriculture seriously.

“Our first point of contact is agriculture and nobody should go hungry in Ghana. Enough of the slogans and talks. We need a proper module and not an agriculture programme that is import dependent such that when there is a Russia/Ukraine war, you cannot have fertiliser, wheat etc. That is not a sustainable programme that can create jobs,” he said.