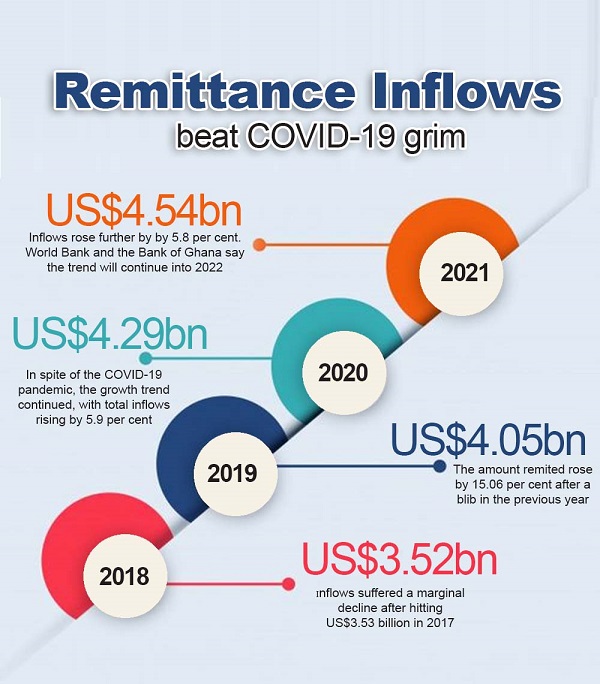 GHANA emerged a top gainer of remittance inflows in the last two years, in spite of the ravaging COVID-19 pandemic that collapsed businesses and eroded the incomes of people across the world.

Remittances to the country continued their steady growth in 2020 and 2021 as more people outside the country capitalised on the silver lining of the pandemic to remit more money back home to their relatives and friends.

Last year, remittances to the country rose by 5.8 per cent to $4.54 billion, according to the World Bank’s Migration and Development Brief released last month.

Experts trace the steady growth in remittances to the country in the midst of the pandemic to the countercyclical nature of the gifting culture, the presence of most Ghanaian non-resident workers in the health and social services sectors of their host countries and the rolling out of unemployment benefits to victims of the COVID-19 pandemic.

With the World Bank now estimating that remittance inflows to low- and middle-income countries (LMICs), including Ghana, would increase by 4.2 per cent this year, chances are that more money would be remitted to the country to help families and friends cope with the current challenges.

BoG has already said that it expected the growth trajectory to continue into this year as the global economy returned to the path of growth with restrictions eased and life return to normal.

A Professor of Economics, Prof. Peter Quartey, told the Graphic Business on June 14, that increased inflows of remittance was good for the economy as it strengthened the reserve position of the country.

Reserves are the assets of BoG that the central bank uses to pay for goods and services that the country purchases from its peers.

It also serves as a cushion against the cedi depreciation.

Given the benefits, Prof. Quartey, who is the Director of the Institute for Statistical, Social and Economic Research (ISSER), University of Ghana, said the increased inflows of remittances helped to cushion the country against the ravaging effects of the pandemic.

“Remittance inflows are also used for investments. Some people remit to invest, others remit for education while others also send money back home to fund the medical bills of their relatives and friends.

“So, when you have remittance inflows growing, it means that these sectors; education, health and investment benefit,” the Director of ISSER said.

“It also smoothens out household consumptions. People remit money to help their relatives feed. So, in general, remittance inflows play a greater role in the economy and its increase contributes to economic growth,” he added.

At $4.54 billion for 2021, remittance inflows to Ghana are now at an all-time high after starting off at $6 million in 1990, according to the World Bank data.

On what accounted for the steady growth in remittance inflows in spite of the scourge from the pandemic, Prof. Quartey said remittances tended to be countercyclical.

“They increase when there are shocks. When there are economic shocks, disasters or general challenges, people tend to be more sympathetic and so they remit more to their relations to help alleviate the suffering.

“Perhaps that is what we are witnessing,” he said, noting that the countercyclical nature of remittances had been tested over the years.

“It also makes sense that if your neighbour is suffering, you have to send something to help and that is what is reflecting in the trend.

“Again, the global economy is growing in spite of the pandemic. After 2020, we have seen some growth although not as high as before and so it means that people are still gaining incomes to be able to send money back home,” the Professor of Economics said.

The ISSER Director also concurred with earlier positions that the relatively large number of Ghanaians in the health and social sectors of most Western countries made them more financially resilient to be able to remit money back home.

Given that such sectors were insulated from the layoffs that followed the outbreak of the virus, many experts explain that workers in the health sectors and social services rather gained, thereby strengthening their ability to send money home.

It concluded that in 2022, remittance flows to low- and middle-income countries (LMICs) were expected to increase by 4.2 per cent to reach $630 billion.