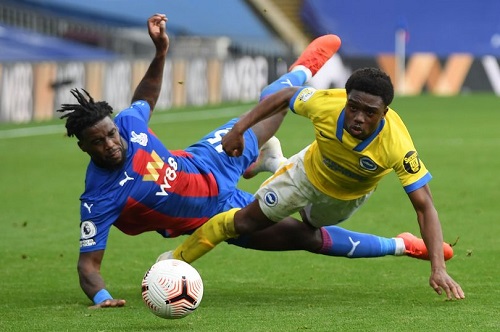 Tariq Lamptey is gaining a reputation as one of the most exciting young talents in the top flight, and the statistics show he is getting forward more than his rivals

Lamptey is gaining a reputation as one of the most exciting young talents in the top flight and the statistics show he is getting forward more than his rivals and therefore more likely to be fouled.

Remarkably, Lamptey - known for his overlapping forward runs - was fouled 3.28 times on average in 90 minutes which is even higher than Wolves flier Adama Traore (2.10) who often starts as a wing back.

Brighton full back Lamptey, 20, also tops the charts when it comes to dribbling with an average of 4.82 runs past opponents in every game which is better than the likes of Trent Alexander-Arnold, Kyle Walker and Hector Bellerin.

Lamptey has already caught the eye of major European clubs as Bayern Munich, Sevilla and Manchester City are all now watching his progress.

Brighton signed Lamptey in January in a bargain £3m deal from Chelsea as the Londoner wanted to get out and play regularly in the Premier League.

That decision has been rewarded with a string of excellent performances and also an England under-21 call-up and, having played in an under-21s qualifier, he has pledged his allegiance to the Thee Lions despite also being eligible for Ghana.

Brighton are now keen to tie him down to a new contract but there is no rush and that is unlikely to happen quickly as Lamptey focuses on his football after quickly establishing himself in the top flight.

England boss Gareth Southgate is blessed with an incredible array of talent in the right back position with Alexander-Arnold, Kyle Walker, Aaron Wan-Bissaka and Kieran Trippier.

But Lamptey is now the rising star and a key factor in Graham Potter’s revolution at the AmEx as his performances and stats continue to catch the eye.

He is second in the crossing accuracy charts with 46.15 per cent behind Newcastle ’s Jamal Lewis while he is third in the defensive duels with 4.60 behind Vladimir Coufal and Wan-Bissaka.