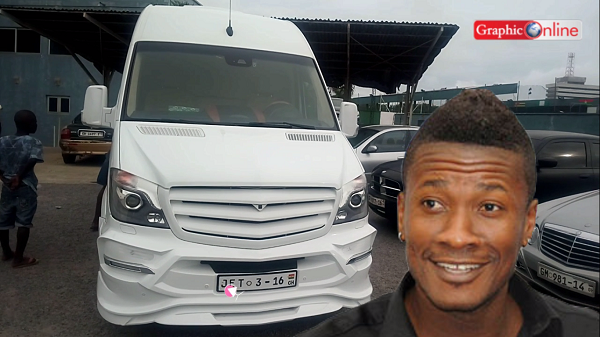 Black Stars skipper Asamoah Gyan arrived in style for his first training session with the Black Stars shortly after touching down from his base in the United Arab Emirates.

Gyan who earns £227,000 a week (£11.8m annually) from Chinese club Shanghai SIPG was chauffeured to the Accra Sports Stadium in a customised Mercedes-Benz bus.

A peek into the luxurious white vehicle revealed purple velvet seats with gold trimmings, a bar, as well as three 42-inch LED televisions.

Gyan, currently on-loan at Al Ahli in the UAE from Shanghai SIPG acquired the vehicle last year and often rides in it with his brothers as well as members of his Gyan-Unit clique.

The bus was mobbed by many fans who took advantage of the opportunity to take photographs with the car as well as with the Black Stars captain.

Take a closer look inside Asamoah Gyan's luxury Mercedes-Benz in the video below;