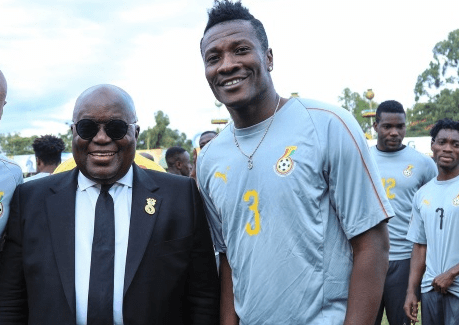 Asamoah Gyan has made a u-turn on his decision to retire from the senior national team.

His decision follows a conversation between him and President Nana Addo Dankwa Akufo-Addo on Tuesday after he announced on Monday that he had recused himself from the 2019 Africa Cup of Nations and subsequently retired from the Black Stars.

The development, according to what Graphic Online has gathered followed a communication by Coach Kwasi Appiah to Gyan that he wants to make him the general captain of the team.

But in a statement issued Wednesday, the 33-year-old forward said he cannot disregard the President's request for him to change his decision and has, for that matter, decided to make himself available for selection by Coach Kwasi Appiah.

"A presidential request is one that cannot be disregarded. I have had the opportunity to speak with the father of the nation, the President of the Republic, His Excellency Nana Addo Dankwa Akufo-Addo, who, though respecting my wishes as spelt in my letter of 20th May, 2019, has asked me to rescind my decision to retire permanently from the Black Stars.

"I have taken the request of His Excellency Nana Addo Dankwa Akufo-Addo in good faith, and will make myself available for selection by coach Kwasi Appiah.

“My desire to help Ghana end the over three-decade long wait to annex the AFCON trophy still burns strong and I remain committed to serving this great nation and the people of Ghana,” the statement said.