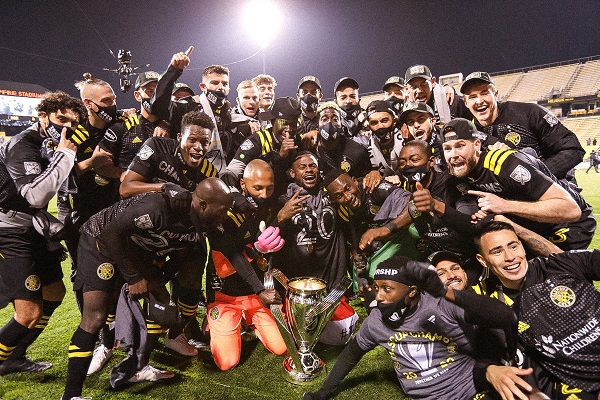 Behind an inspired performance from club-record signing Lucas Zelarayan, the Crew resoundingly beat the Seattle Sounders 3-0 on Saturday night, denying Seattle a championship repeat and returning to MLS's peak for the first time since 2008.

While Mensah was impregnable in defence for Columbus, his compatriot who had a much more difficult night made up for it with a picture-perfect cross for a Zelarayan goal.

Zelarayan put an exclamation point on his MLS Cup MVP presented by Audi performance, icing the game in the 82nd minute by making it 3-0. .

The Crew were without winger Pedro Santos and midfielder Darlington Nagbe after both were deemed not medically cleared to play and later confirmed they had tested positive for COVID-19, though their absences were hardly noticeable – especially during a dominant first half. And Columbus found their reward in the 25th minute when Zelarayan made it 1-0 for the hosts, peeling to the back post and willing a left-footed shot past Seattle goalkeeper Stefan Frei, making the most of a deep, early cross from right-back Afful.

The Crew doubled their lead six minutes later, with Derrick Etienne Jr. curling home a delicate shot to the far corner. The Haitian international winger earned the 2-0 advantage in the 31st minute, one-timing a right-footed shot with finesse after Zelarayan faked his shot and picked out the incisive pass.

Seattle made four substitutions between halftime and the 60th minute, including both outside backs, looking to recapture the magic of their comeback victory over Minnesota United FC in the Western Conference Final.

Those efforts fell short, though, with Nicolas Lodeiro cushioning a layoff from Jordan Morris just wide in the 71st minute. Cristian Roldan also came close in the 51st minute when his corner-kick header missed the top corner, and Morris hit the crossbar with a header in the 80th minute. Yet they couldn't get one past Eloy Room, who finished with two saves upon his return to the lineup.