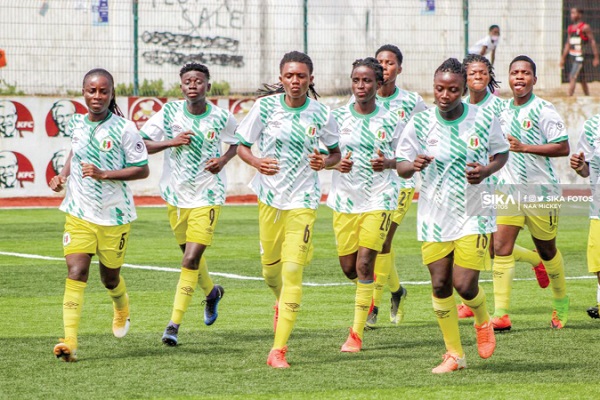 Sekondi Hasaacas Ladies have left Accra for Cairo to participate in the inaugural edition of the Confederation of Africa Football Women’s Champions League which starts on November 5, 2021.

Hasaacas Ladies qualified for the continent's premier inter-club competition as champions of West Africa Football Union (WAFU) Zone B and will play in Group A alongside Malabo Kings of Equatorial Guinea, AS Mande of Mali and Egyptian side, Wadi Degla.

The Ghanaians open their campaign on Friday against Malabo Kings and then take on AS Mande three days later before wrapping up the group contests against the hosts team on November 11.

In a pre-departure interview, Coach Basigi said the team would aim to go all the way to the final and win the continental trophy.

"Our mission will be to go all the way to the final and win the cup. We are not going to be over-confident or complacent but will take a match at a time.

“Our early departure from Ghana and arrival in Cairo will help us acclimatise and get into competition mood. I know it is not going to be easy, but we will work hard for it,” Coach Basigi said.

Team captain Janet Egyir was optimistic about their chances, saying they would draw on their experiences from playing in the various national teams to psyche and motivate themselves for the competition.

“Like any tournament, you have to strategise to progress and I believe that is what we will do. Our experiences in the various national teams will be of great help in this campaign,” said the experienced player who led Hasaacas Ladies to win the Women's Premier League and Women's FA Cup in Ghana, and travelled to Cote d'Ivoire to win the first-ever WAFU Zone B Women’s Club Championship.