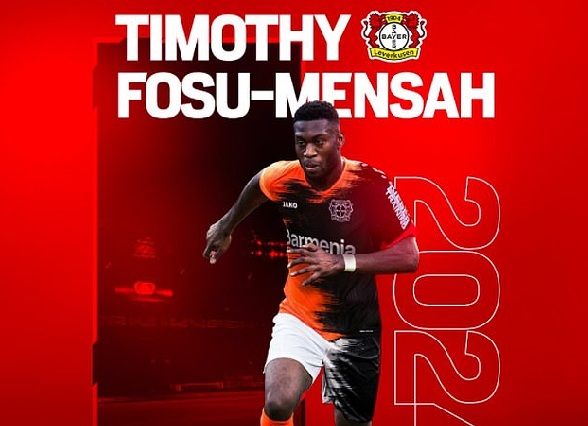 Timothy Fosu-Mensah has completed his £1.8million move from Manchester United to Bayer Leverkusen.

The 23-year-old defender leaves Old Trafford having made 30 first-team appearances over the past six-and-a-half season - but just three this season.

His time with United also included loan spells at Crystal Palace in 2017-18 and Fulham the following season as successive managers failed to be impressed enough to give him a regular spot.

Fosu-Mensah has now agreed a contract until 2024 with the Bundesliga club, who are currently third in the table and hopeful of challenging Bayern Munich for the title.

A source close to Fosu-Mensah has told the Manchester Evening News that the 23-year-old is sad to be leaving United but is 'excited to get a fresh start and show people what he is really capable of.'

He had rejected the offer of a new three-year contract tabled by United last month.

The Holland international is well regarded for his versatility and is capable of playing at centre-half, right-back or as a defensive midfield.

“Timothy is a technically adept, fast and physically strong defender who can be used as a right-back and also in the centre,' said Leverkusen sporting director Simon Rolfes.

“Tim is still young and capable of development.”

Fosu-Mensah, who has been handed Leverkusen's No 24 shirt, said: “[This is] a step into a really interesting and very strong league in which Bayer has been one of the best teams for years.

“I'm really looking forward to working with this team and also with [coach] Peter Bosz.

“I've talked a lot with the trainer in the past few days and conversations with Simon Rolfes and Rudi Voller have convinced me there are great prospects in Leverkusen, both for me personally and for us as a team.

“It's going to be really exciting.”

United signed him from the Ajax academy in 2014 and he was handed a professional debut - paying at left-back - by Louis van Gaal in a 3-2 Premier League win over Arsenal in February 2016.

Plagued by injuries, Van Gaal played Fosu-Mensah 10 times before the end of that season and 11 times in the next campaign.

But Jose Mourinho decided to send the youngster out on loan twice and he was never able to regain his place in the United side.

He has been used sparingly by Ole Gunnar Solskjaer this season, having struggled in the 3-1 home defeat by Crystal Palace in United's opening Premier League fixture.

He subsequently made substitute appearances in the Champions League games away to Istanbul Basaksehir and RB Leipzig.

Fosu-Mensah hadn't been named in a United squad since the Carabao Cup quarter-final away to Everton just before Christmas and Solskjaer gave the green light for him to move away.

Conscious of his shortage of game time, Solskjaer said last week that Fosu-Mensah was frustrated and 'needed to go and play again.'

Solskjaer said: “I'm not sure if Timo is going to stay or [if] he's going to take an option now.

“He's not played enough, so of course he's been allowed to speak to clubs, with a view to leaving now in January.

“It's difficult when you've got good players, talented players, and you can't give them game time. He's now at the stage where he needs to go and play again.

“It might be [at the] end of January, or it might be in the summer that he finds somewhere else.

“So he's working hard, Tim, he's ready for a move for any club that he feels ready for.”