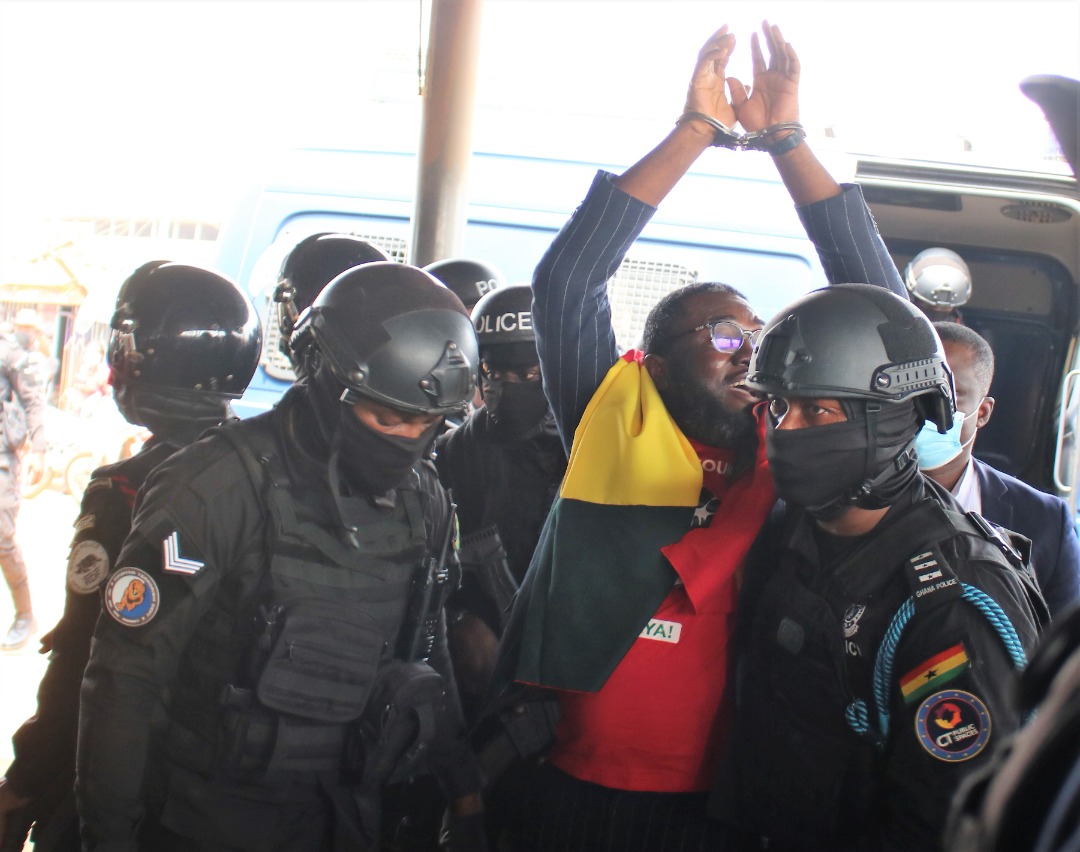 Oliver Barker-Vormawor, who has been charged with treason felony was Monday thrown out of the Ashaiman District Court room over a comment the court deemed distasteful.. PICTURE BY DELLA RUSSEL-OCLOO Follow @Graphicgh

Oliver Barker-Vormawor, who has been charged with treason felony was Monday thrown out of the Ashaiman District courtroom over a comment the court deemed distasteful.

He, has, however, been remanded again in police custody to re-appear on March 15, 2022.

Barker-Vormawor was making his second appearance at the Ashaiman District Court where he had been arraigned on the charge of treason felony.

His counsel, Dr Justice Srem-Sai had enquired why the prosecution had arraigned the accused at the district court, which he deemed lacked the jurisdiction to determine the personal liberty [bail] of the accused person in relation to the charge of treason felony.

He also questioned whose duty it was for the accused to be presented before the right forum, saying, “It is not every Ghanaian who has the resources to apply for bail, hence the constitution places the responsibility on the police to ensure that offenders of the law are put before a court of competent jurisdiction."

Dr Srem-Sai’s argument was following a ruling by the court the last time the accused was arraigned that stated that the court had no jurisdiction to grant bail on the charge levelled against the accused.

However, at Monday’s hearing [February 28, 2022], the prosecution maintained that the court has jurisdiction to determine indictable offences such as the one for which the accused was arraigned.

The prosecutor, an Assistant Superintendent of Police (ASP), Sylvester Asare, said jurisdiction is a creature of status and since the offence is a first-degree felony, it could be a subject of an indictable issue of which the court of the first instance ought to be applied.

ASP Asare said that the legal team of Barker-Vormawor know the appropriate forum to appeal for human rights issues.

“Prosecution is before the District Court because the law says, a court of the first instance and if the defence has any human rights issues or interpretation, then the appropriate forum should be the high court or the Supreme Court,” ASP Asare said.

The submission of the prosecution, moved the accused [Barker-Vormawor], who exclaimed from the dock that they did not ask for bail.

“I will not accept any kangaroo and sham process. The bench has not covered itself in glory,” he said to the surprise of his lawyers who moved in to calm him in the dock.

The presiding judge, Mrs Eleanor Kakra Barnes-Botchway then ordered that the accused should be taken out of the court room.

“This is not the first coup d’état case I have to deal with,” the judge said.

Addressing Barker-Vormawor’s legal team, the judge said whereas the accused may seem to have a certain mind-set against the bench, she, as the judge had no interest in the case for the accused to refer to the court as a “Kangaroo” one and “I am going to make sure his conduct will reflect in the records on the proceeding,” the judge added.

The judge also said she overlooked the Ghana flag with which the accused adorned himself with when he came into the courtroom.

Counsel for accused, Dr Srem-Sai rendered an unqualified apology on behalf of Barker-Vormawor and prayed the court to tamper justice with mercy.

The court asked the police to speed up investigations into the case.

“The docket should have been sent to the Attorney General’s department by now for the necessary advice on how the case should proceed,” the judge said.

Barker-Vormavor was remanded into police custody to reappear on March 15, 2022.