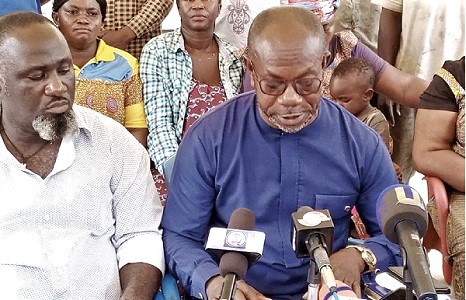 Anthony Oppong, Chairman of the Ashanti Regional Chapter of the Ghana Union of Traders Association, addressing the media
30.5k Shares

The leadership of the Suame Magazine spare parts dealers and allied bodies have rendered an unqualified apology to the Member of Parliament (MP) for Suame for last week's attack on him.

Some irate members among the group went to the extreme to pelt Osei Kyei-Mensah-Bonsu with sachet water, as he attempted to engage the dealers to explain what had caused the delay in fixing roads at Suame in Kumasi.

At a press conference at Suame last Friday, the Chairman of the Ashanti Regional Chapter of the Ghana Union of Traders Association (GUTA), an umbrella body of the dealers, Anthony Oppong, described the attack as unfortunate, knowing how the MP had contributed towards the development of the area.

"We least expected that some miscreants among us could go to this length and embarrass both leadership and the MP of the area.

"We condemn the actions by those cowards who took advantage of the situation to attack the MP of the area," he said.

Mr Oppong commended Mr Kyei-Mensah-Bonsu for his swift action in ordering the contractor, Joshob, to move to site to fix the Suame Magazine section of the Kumasi-Offinso road.

Currently, one stretch of the road is being fixed with asphalt overlay to ease traffic and work”’ is expected to be ready by the first week of August this year.

The fixing of the overlay delayed because according to the contractor, the company run out of asphalt, but it had been able to secure some from Cote d'Ivoire for work to be completed.

Currently, the Majority Leader who also doubles as the Minister of Parliamentary Affairs is leading Parliament to push for a loan facility from Spain for the Suame interchange to commence in September this year.