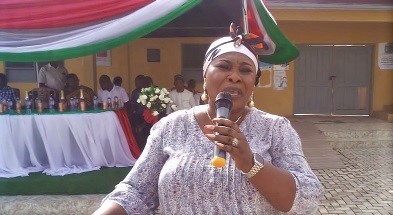 The Eastern Regional Women's Organiser of the National Democratic Congress (NDC), Shirley Naana Ampem, has asked female colleagues aspiring to contest any position during the party's internal elections to desist from making negative remarks about one another.

According to her, the internal elections was a family affair, hence all those aspiring to contest in the event should see themselves as members of the same family.

She said the NDC was a democratic political institution as such anybody within the party, especially women had the right to contest for any position of their choice.

She explained that since political parties were human institutions, there were bound to be differences among members.

"At times, many of us make derogatory remarks about one another just to garner votes at internal elections which do not go down well for us and the party as a whole. We must, therefore, refrain from doing that", the women's organiser stated.

"If we bury our differences, it will make it easier to dislodge the New Patriotic Party (NPP) at the December 2024 polls," Madam Ampem said.

"Tell delegates exactly what you can do to bring the NDC back to power, convince the delegates beyond doubt the things you are bringing on board to encourage them to vote for you at the upcoming elections. It is better for aspirants to engage in a healthy campaign other than denigrating their colleagues for the sake of votes," Madam Ampem told all aspirants.

She encouraged the women organisers to work hard to secure victory for the NDC at the 2024 polls and win the New Juaben North Constituency seat.

Madam Ampem stressed that it was unity, togetherness and understanding that would bring the NDC back to power.

The Eastern Regional Vice-Chairman in charge of administration of the NDC, George Mensah Akpalu, said the campaign for the 2024 general election had just begun and, therefore, urged the rank and file of the party to propagate the good messages of the party intended to bring economic relief to Ghanaians.

The New Juaben North Constituency Chairman of the NDC, Alhaji Nasiru Abdul Rahman, entreated party executives to work responsibly and be committed to the NDC’s aims and objectives of winning the December 2024 election.

"The time has come for NDC to take over the New Juaben North Constituency parliamentary seat as the NPP has occupied the seat since 1996 but no improvement in the constituency," he stated.