Special Voting: Some security personnel can’t vote at Kwadaso, they did not apply for special voting 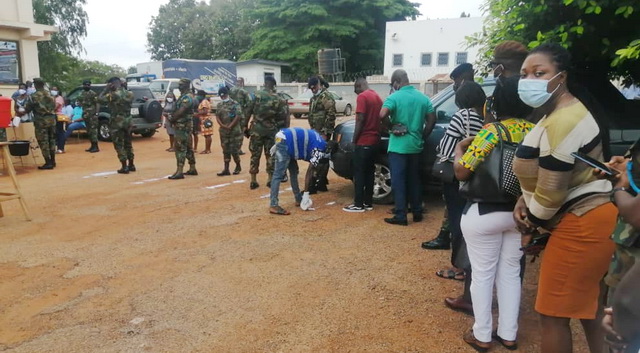 Graphic Online’s Kwadwo Baffoe Donkor reports from Kwadaso in the Ashanti region, that a number of security personnel who came to vote in the special voting exercise could not find their names in the register and had to return home.

Initially the parliamentary candidate of the National Democratic Congress for the constituency, Eric Assibey tried to intervene by asking the presiding officer, Mrs Thelma Annan to allow them to vote but she declined.

According to her, the affected personnel still have the chance on December 7 to cast their ballot and allowing them to vote now under the circumstance would amount to an irregularity.

Mrs Annan told Graphic Online that with the exception of Electoral Commission officers, some of the security personnel could not find their names on the special voters register and explained that those affected were those who did not submit their names for the early voting exercise.

She said some of them believed that by virtue of their profession, they would be allowed to vote in the special voting without applying for it.

However, she said the process does not work that way and participants should have submitted their names to be considered.
Beyond that development, the process has been described by stakeholders as very smooth and peaceful.

Dr Kingsley Nyarko, the New Patriotic Party parliamentary candidate and his NDC counterpart, Mr Assibey both said the process had been smooth so far.

And from the Wa Central Constituency of the Upper West Region, Emmanuel Modey reports that the exercise has been smooth, starting at the two special polling stations on time.

According to the Returning Officer at Court One A, Dr Joseph Wulifan, voting started at 7am with no hitch. He said 434 voters were expected to cast their votes by close of day, and as at 7.52 am, 52 voters had cast their votes.

At Circuit Court One B, Mr Adams Iddrisu Thirdman, the Returning Officer, said the exercise started at 7.am as usual and out of the expected 433 voters, 38 people had cast their votes.

At the two polling stations, there were long queues with voters patiently waiting for their turns to cast their votes. All personal wore protective equipment.