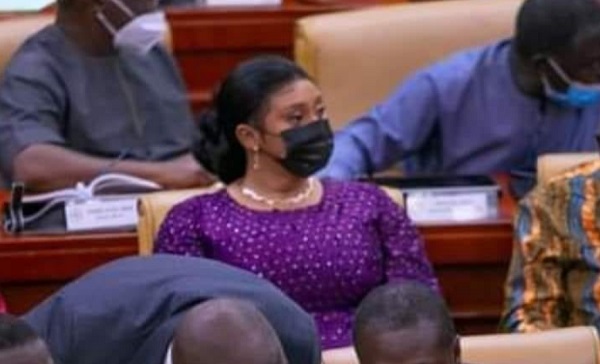 The Minority in Parliament says it is investigating a suspected case of impersonation of the Member of Parliament (MP) of Dome Kwabenya, Sarah Adwoa Safo yesterday when the 2022 Budget Statement and Economic Policy of the government was approved.

According to the Minority MP for North Tongu, Samuel Okudzeto Ablakwa after reviewing footage of yesterday's sitting it was becoming apparent that there may have been a case of impersonation of the Dome Kwabenya MP.

LISTEN TO THE INTERVIEW BELOW;

“Following pictures and videos we are reviewing this morning it is becoming quite apparent to us that there may be a case of impersonation," Mr Ablakwa said in an interview on Joy FM.

The lady who was presented as Adwoa Safo. It’s beginning to appear that she may not be the one and it is a matter that we are investigating seriously and we are probing further and I am sure that in subsequent hours we will make our decision on what we will like to do clear on that matter.

"We are reviewing footage and we have spoken to some of your colleagues in the media who were not even allowed to come close to that person to interview her.

"So, whoever that person is, we will get to the bottom of it. We are taking a very serious view of that and I am sure that there will be the basis of some enquiry moving forward".

On October 6, 2021, Mrs Safo who doubles as the Minister of Gender, Children and Social Protection had her leave which was to have ended on August 31 extended by President Nana Addo Dankwa Akufo-Addo.

It was unclear when Mrs Safo first went on leave.

In her absence, the Minister for Sanitation and Water Resources, Hon Cecilia Abena Dapaah has been acting as caretaker Minister at the Gender Ministry.