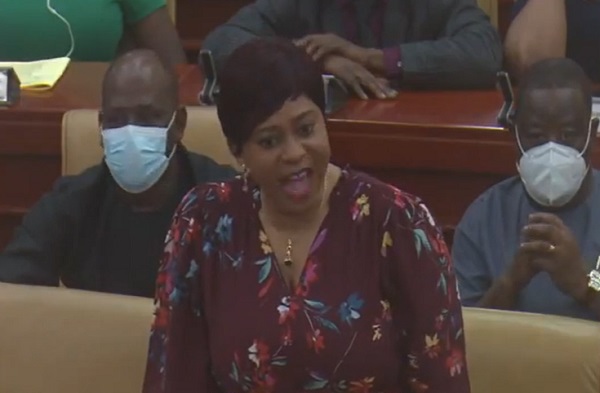 The Member of Parliament of Dome Kwabenya, Sara Adwoa Safo has responded to allegations that she was not present in Parliament on Tuesday when the 2022 Budget and Economic Policy statement of the government was approved.

Greeted by cheers when she caught the eye of the Speaker to address a point-of-order, Ms Safo specifically addressed the concerns over an alleged impersonation which were raised by the Member of Parliament for North Tongu, Samuel Okudzeto Ablakwa in a media interview.

It has been speculated on social media that a person who was in a face mask and sat next to the Member of Parliament for Esikado Ketan, Mr Joe Ghartey was deemed to be Adwoa Safo.

Some have suggested that, the person who sat next to Mr Ghartey was not Adwoa Safo.

On the floor of Parliament Wednesday, Ms Adwoa Safo addressed the issue of her presence in the House.

"Mr Speaker, I also want to state on record, Mr Speaker, this is a House of records and as the former Deputy Majority Leader of this House, I was present in this House yesterday [Tuesday]," Ms Safo said.

She also urged Mr Ablakwa to withdraw his comments about her impersonation which she considered an "insult on womanhood".

"Mr Speaker, and to state categorically that I cannot force Honourable Okudzeto Ablakwa who is my friend on the other side to dress the way I want him to dress and that is an insult on womanhood and those making that noise should withdraw".