Songhai Centre: From waste to wealth

How come Africa is so rich and yet is the poorest continent? This has been a worrying phenomenon for a long time. What really accounts for this mishap when, in the midst of plenty, many African people are hungry? Is Africa exporting wealth but importing poverty?

These considerations were the primary motivation that took me to the Songhai Centre in the Republic of Benin where there is zero tolerance for waste, as every form of waste is considered wealth.

According to the Director and Founder of the Songhai Movement, Father Prof. Godfrey Nzamujo, he was inspired to act because of the devastating drought and hunger of the 1980s in Ethiopia.

His aim was, therefore, to create a “zero waste” agricultural system and create jobs for the people. 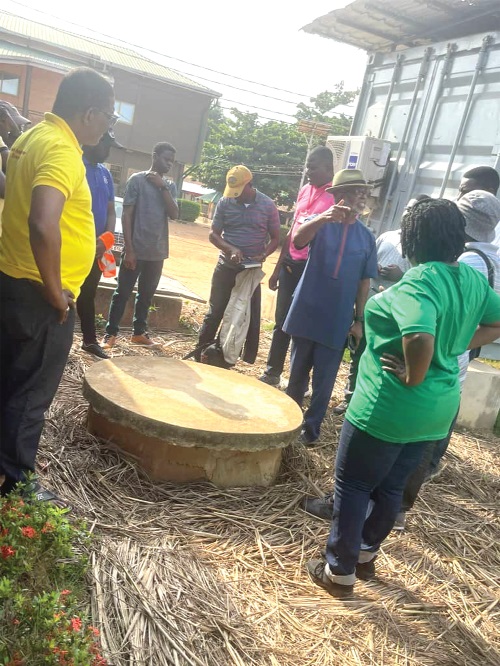 Prof. Nzamujo explaining waste to energy to the delegation

From all indications, the Songhai Centre was created by the visionary and inspirational educator to give Africans an environment and opportunity in which they could monitor, evaluate and learn about themselves and how to grow up in the midst of plenty.

At Songhai Centre, nothing goes to waste and every waste is used to generate wealth, and so was the visible observation. You can call it ‘Waste to Wealth’ and you will not be far from right.

Songhai was a desert

“When I came here about 30 years ago, it was a desert; nothing at all. The land was dead. But look at what you see now,” Father Prof. Nzamujo told a visiting delegation from Ghana, including this reporter, the Board Chair of the Graphic Communications Group Limited (GCGL), the Marketing and Sales Director of the GCGL, representatives from the Ministry of Finance and a team from the New Year School, University of Ghana. 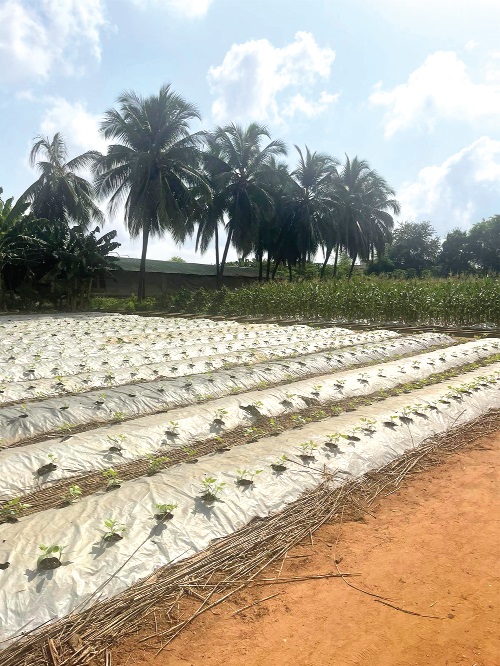 Usage of plastics to ensure weed-free planting at the centre

For me, it was a life-long experience to be at the Songhai Centre, where everything is made so simple and can easily be replicated. I understand that the Songhai model has been replicated in several African countries, including Nigeria, Uganda, Sierra Leone and Liberia, and that its partnership now extends to organisations in Europe, the Americas, Asia and Africa.

From “sowing to production” or “soil to table”, efforts are geared at zero or minimum waste.

At the centre, they have a workforce of over 1400 and the number keeps changing every day because it is community based. Tilling land of over 1,000 acres, they have agriculture that grow production; they have animals and fish.

Waste from one section is recycled to become an input at another section. For example, the water at the Songhai Centre is rich with fish. Everywhere you find water, there are fishes in it. Waste water, instead of being thrown away, is used to irrigate crops. So at the centre they do not buy anything.

Animal waste is recycled through bacteria to fertilise the soil, while waste from animals and fish is used to produce energy.

In short, at the Songhai Centre, nothing goes to waste.

In Africa, according to Prof. Nzamujo, “We are always exporting wealth and importing poverty. This is not acceptable.”

For him, the old agricultural system was dysfunctional and not working for the African continent.

He said there was the urgent need to move from soil to production and to produce more and better with less.

“We must quickly move away from passive consumption into production,” he underscored.

In the view of Prof. Nzamujo, there was the need for a total paradigm shift of mentality, where development would be focused at the local level, with governments initiating and providing policy direction.

He warned that “something was wrong” for Africa to be the poorest continent when it should be the richest. 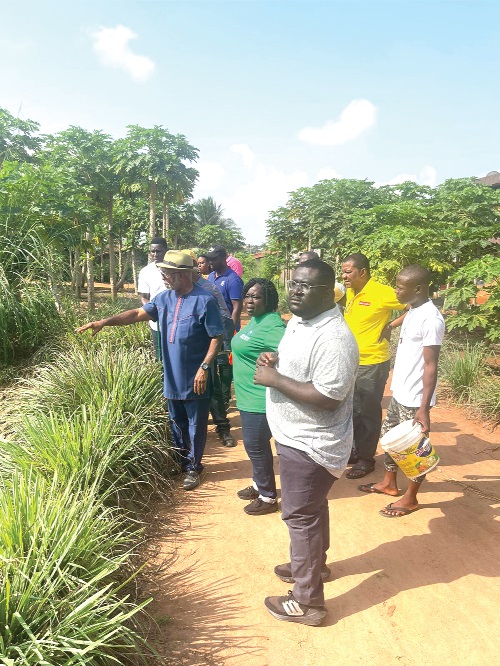 Prof. Nzamujo emphasising the importance of organic planting to the delegation

He added that monitoring, evaluation and learning were also important, noting that a broad-based and inclusive economy was the way to go.

“The mentality where everyone is on his or her own is not helping the African continent,” he cautioned, saying: “The new economy of tomorrow for Africa must be built today.”

In pursuit of his vision, started some 36 years ago, Prof. Nzamujo said Songhai was a new African society, a laboratory where it could show that Africa could do it by harnessing all the resources, build its human and environmental resources to create a new world.

But, in all of that, he declared: “The beginning of the take-up point is agriculture. That agriculture must be sustainable to produce better and more with less.”

For him, that new agriculture was going to bring a new habitat, where people would work where they lived and live where they worked; eat what they produced and produced in a way that enhanced the environment.

He also advocated farms that were designed to mimic natural ecosystems.

Songhai also runs eco-literacy programmes and has trained more than 30,000 farmers since it began.

Songhai promotes agricultural entrepreneurship among the youth in Africa. This is done in an environment where appropriate and positive human values are regarded as essential elements.

Young Africans are trained to become responsible citizens in their communities; socio-economic entrepreneurs, men and women with initiative and creativity, ready and able to meet the social and economic challenges of the future.

This means that in addition to the knowledge and skills students acquire at the centre, it also trains them to develop a strong desire for change and for a better life.

The Songhai Centre is principally involved in agricultural training, research and production for sustainable livelihood in Africa.

Founded in 1985, the centre has been managed by Africans since inception. Its aim is to create the conditions for improving the lives of Africans, the great majority of whom live in rural areas.

“The Songhai Centre is a world leader in innovative development programmes, including integrated farming, biomass gasification, micro-enterprise and IT for rural communities. It has established partnerships and student exchange programmes with a number of US universities (Wake Forest, SUNY-Oswego, Colorado State) and has close ties with universities and technical schools across Africa,” Prof. Nzamujo said.

Songhai’s headquarters is in Porto-Novo in the Republic of Benin.