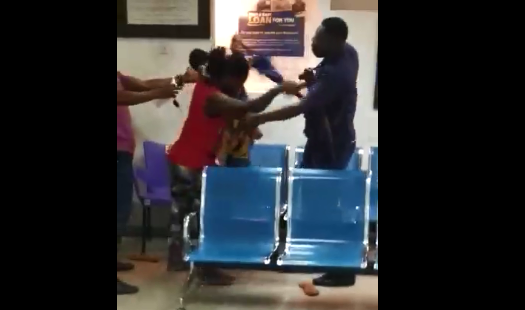 video shows the policeman hitting the woman on her head with an umbrella and further punching her in the face.

It later emerged that the incident happened at the Shiashie branch of Midland Savings and Loans Limited in Accra.

The woman, Patience Osafo had gone to the financial institution to withdraw her savings and for four days, she could not get her money with the excuse that there some network challenges.

On the 5th day, she decided to protest and insisted on withdrawing all her savings before leaving the banking hall.

The police officer was invited to pull her out which resulted in the scuffle and subsequent assault.

In the video, another man is seen trying to pull the woman away from the armed policeman; but the woman is adamant as she also hits back at the officer.

The man, however, manages to take the baby from the woman.

Below is the video

Below are some of the social media reactions