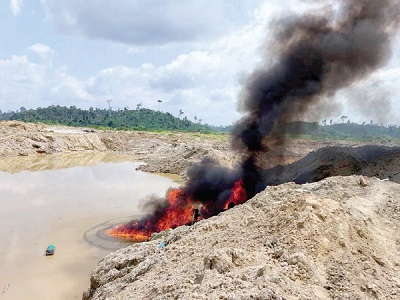 Some mining equipment set ablaze at the banks of River Offin in the Western Region
30.5k Shares

A total of 838 Changfan machines and other mining equipment being used by illegal miners on the Offin River in the Western Region have been seized and burnt by the Operation Halt II team.

The equipment were impounded and burnt in a three-day operation carried out by the military task force against galamsey in water bodies.

The Operation Halt II team was deployed to the area last Sunday to permanently patrol the Offin and four other rivers to halt illegal mining activities in those water bodies.

The military deployment followed a video that went viral on social media about galamsey activities in the Offin River.

The Deputy Minister of Lands and Natural Resources in charge of Mines, George Mireku Duker, and the Chief Executive Officer (CEO) of the Minerals Commission, Martin Kwaku Ayisi, led a team from the Lands and Natural Resources Ministry to the area yesterday[August 16, 2022], and observed that the illegal miners had heavily polluted the Offin River.

Some of the floating platforms and equipment mounted in various sections of the river had been decommissioned and destroyed or burnt.

Mr Duker stressed that the operation carried out by the Operation Halt II team was just a foretaste of what was to come, saying the team would be ruthless in weeding out recalcitrant galamsey operators.

"We want to remind everyone about the government's uncompromising and unshakeable stance against illegal mining. Those who are stubborn and will not pay heed to any warnings should be prepared because we will keep coming at them," he stressed.

He assured the public that the current operation would remain in force until all waterbodies in the country regained their health. 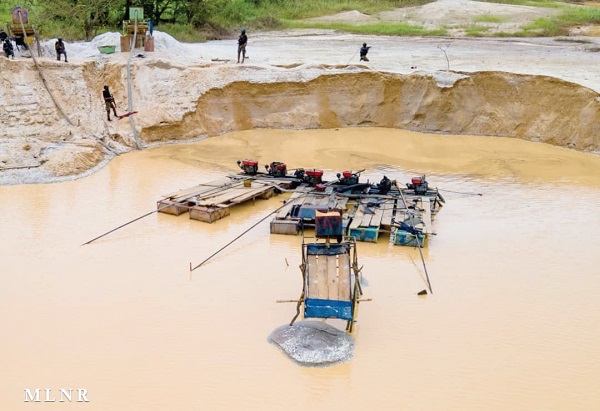 He called on residents of mining communities to rally around the government to ensure that "these recalcitrant and greedy people who are destroying our heritage and future of this country are dealt with".

Mr Duker commended the military team for the good work done, and urged them to go all out to clear the galamsey operators from the system.

The Commander of the military team, Brigadier Amoah Ayisi, said since the team commenced the operation last Sunday, the illegal miners had been cleared off the water bodies.

He said Changfan machines and other equipment up to nearly 900 had been burnt.

Brigadier Ayisi said the team was committed to discharging their responsibility in the national interest.

The team of security men was deployed last Sunday to clamp down on illegal mining activities on six major river bodies that had come under heavy attack by illegal miners.

They were tasked to arrest all persons found mining in water bodies and clear the rivers of all mining equipment.

Since 2017, the government has rolled out a gamut of interventions to curb illegal mining.

In an effort to effectively deal with illegal mining in water bodies, the Minister of Lands and Natural Resources, Samuel Abu Jinapor, recently commissioned five speed boats to help the Ghana Navy patrol the Ankobra, Pra, Offin, and Birim rivers and the Black Volta.