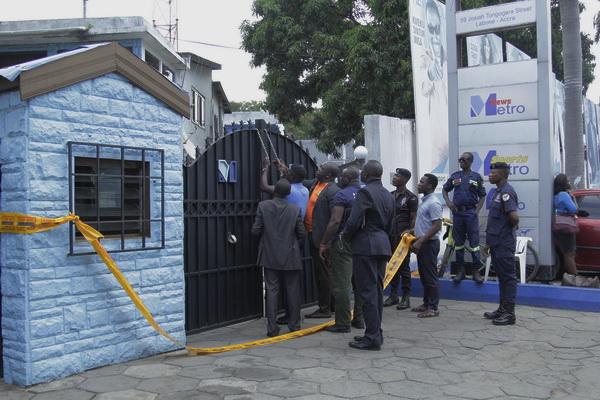 Some GRA officials sealing off the premises of Metro TV. Follow @Graphicgh

A team from the Debt Management and Compliance Enforcement Unit of the Ghana Revenue Authority (GRA) on Wednesday shut down Metropolitan Television (MetroTV) in Accra for not paying taxes amounting to GH¢ 2.3 million over a four-year period.

A breakdown of the debt showed that the station owed GH¢55,000 in Pay-As-You-Earn (PAYE) tax and an additional GH¢1.6 million Value-Added Tax (VAT), as well as incidentals, interest and penalties for defaulting for the past four years, beginning 2014.

Before closing down the company, workers who were busy carrying out their daily duties were led out of the building and the offices and the main gate locked with a special padlock of the GRA.

At about 10 a.m., officials of the GRA stormed the premises of MetroTV at Labone, in Accra, while the company was transmitting live from the Accra International Conference Centre where the expose by ace investigative journalist Anas Aremeyaw Anas on alleged corruption in the Ghana football governing body was to be telecast.

The close-down affected the transmission of the station as all the workers moved out of the building.

Briefing journalists after the exercise, the Assistant Commissioner in charge of Communications and Public Affairs Unit of the GRA, Mr Bobbie Ansah, said the authority had over the period followed the necessary processes to ensure that the TV station honoured its tax obligation, but to no avail.

“We have gone through the whole process but unfortunately our demands have been met with silence so we had to come and do what the law expects us to do,” Mr Ansah stated.

“Because it is not the wish of the GRA to close down businesses”, Mr Bobbie said, “we had given them enough time and they had refused to do what was expected of them.”

He appealed to other organisations owing taxes to either honour their tax obligations or take advantage of the ongoing tax amnesty.

In December 2017, MetroTV was shut down by the GRA when the latter undertook an exercise to shut down companies and institutions which had defaulted in honouring their tax obligations.

The station, which went off air after the shutdown, resumed operations after it negotiated with the GRA to clear the tax liabilities.