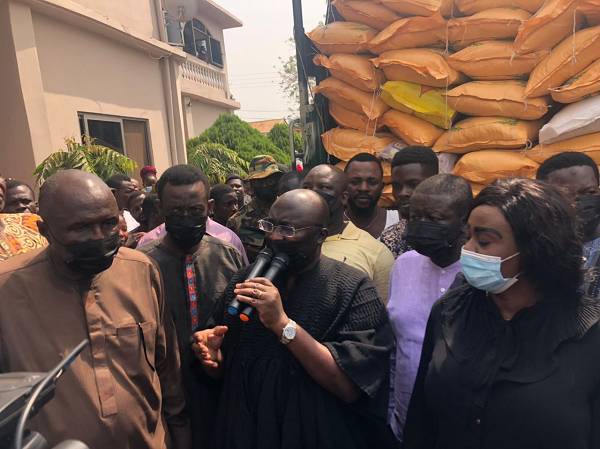 The government has offered support to the injured and the families of victims of last Thursday’s explosion at Appiatse near Bogoso in the Prestea Huni Valley municipality.

The state will rebuild collapsed houses in the community, provide all the needed support to ensure that the community members get back on their feet, resume economic activities and live normal lives.

Consequently, the government has urged the State Housing Company (SHC) to liaise with mining companies in the area to carry out the reconstruction plan.

The Vice-President, Dr Mahamudu Bawumia, disclosed this when he led a high-powered government delegation to commiserate with the people and chiefs of Appiatse, a small mining community lying between Bogoso and Bawdie, which was almost wiped out after the detonation of 10 tonnes of explosives being transported to a mining site.

Between 13 and 17 persons died, while 36 people with injuries have been discharged from hospital, with 36 on admission.

The Vice-President presented cash of GH¢200,000 as well as food items, toiletries, mosquito nets and repellents, students’ mattresses and detergents for the upkeep of the affected community members.

“The government knows that aside from the provision of the relief items, more needs to be done since you cannot be at the temporary shelter forever.

“As I went round I have seen many children and other people who require special care. Therefore, we deemed it right to ensure that there is a little fund available for their upkeep,” Dr Bawumia said.

He was accompanied by the Interior Minister, Mr Ambrose Dery, the Minister of Lands and Natural Resources, Mr Samuel Abu Jinapor, and his deputies, the Minister of Information, Mr Kwadwo Oppong Nkrumah; the Western Regional Minister, Mr Kwabena Okyere Darko-Mensah, and a police delegation led by the Inspector-General of Police, Dr George Akuffo Dampare.

Also among the delegation were the Member of Parliament (MP) for Prestea Huni-Valley, Mr Robert Wisdom Cudjoe, the former MP, Mrs Barbara Oteng-Gyasi, officials of the National Disaster Management Organisation (NADMO) and other high-ranking officials.

The sprawling Appiatse community, a predominantly settler village whose residents are into trading, farming and mine work, is now empty but for a few visible animals.

It was a community of about 200 households, with about 500 commercial and residential structures, which has been reduced to rubbles as the Daily Graphic observed.

The only school in the community had its roof mangled, with irreparable cracks in the six-unit classroom block.

The Daily Graphic team also observed that almost all cars in the community had their glasses and windscreens shattered, with dents all over them while others were destroyed in the explosion.

The explosion also cut off power supply to the community and adjoining communities and districts, which the Electricity Company of Ghana (ECG) was frantically working around to restore at the time of filing this report.

According to the ECG, the line that supplied power to Asankragwa in the Amenfi West and Wassa Akropong in the Amenfi East municipalities, together with a substation, transformer, and many poles, were all destroyed.

More than 100 displaced people are being housed at the Parish Hall of the St Michael Catholic Church at Bogoso, with others putting up with families and friends in unaffected areas and nearby villages and towns, including Bogoso, about 15 minutes’ drive from the epicentre.

The rescue team that started work shortly after the disaster last Thursday erected tents at the parish hall for feeding and the conduct of basic chores by the victims.

NADMO has contracted the services of caterers to prepare three square meals for the displaced people at the shelter.

The Vice-President’s entourage visited the reception facility at Bogoso and the three hospitals where the injured are being attended to.

The entourage again visited the epicentre of the disaster where a crater has been formed as a result of the explosion, splitting the trunk road. The rescue operation has created a by-pass to allow vehicles to use the stretch.

When the Daily Graphic team arrived at the shelter at about 5:30 a.m. yesterday, the displaced persons, including women, children and the aged, were already up and waiting for a word from the authorities.

Their refrain is an appeal to the government and benevolent organisations and persons for support to enable them to meet their basic needs.
Some of them told the Daily Graphic that they had lost everything and were looking for support from the assembly and corporate bodies to enable them to feed their children and also seek medical attention.
One of the displaced persons, Mr Kwao Okutu, said it was sad that they went to work and returned to an agonising disaster.
The Daily Graphic team witnessed a spectacle where two persons who had thought of themselves as lost to the disaster bumped into each other in a bitter-sweet mood with hugs.

At Bogoso, the Vice-President said the disaster took the whole country by surprise and added that the government would not allow the victims to carry the burden of recovery but would take care of the hospital bills of all affected people who were currently in hospital.

Dr Bawumia said the government was monitoring the development closely and any medical case that was beyond health facilities in the region would be transferred to Accra, Kumasi or any facility where the casualties could receive the best care.

“Much as we would have wished that there was no loss of life, we regret that some residents have lost their lives. We are a responsive government, and that is why the government said we would ensure the reconstruction of the destroyed facilities,” he said.

“We want to assure Nananom and the people that we will rebuild the houses,” the Vice-President stressed.

“We will learn lessons but that will be for later. For now, we want to complete the rescue efforts and focus on how best to take care of the families and the injured,” Dr Bawumia said.

The Vice-President highly commended the National Ambulance Service for its quick response to the disaster, NADMO, the Ghana National Fire Service, the Ghana Police Service, the Ghana Army and individuals who brought their excavators to support the rescue efforts, saying “we’ve all worked together in unity, let’s continue to do this.”

Meanwhile, the Ministry of Lands and Natural Resources said it had commenced investigation into the circumstances surrounding the explosion in the community.

A statement signed by the Head of Public Relations at the Ministry, Mr Abraham Otabil, said the minister had asked the Inspectorate Division of the Minerals Commission to thoroughly investigate the events leading to the accident involving the vehicle transporting explosives to mining companies.

It said the investigation was being done in line with the Minerals and Mining (Explosives) Regulations, 2012 (L.I.2177).

"The investigation will, among others, help the government to determine whether the regulations covering transportation of explosives were complied with and also what led to the unfortunate tragedy," he said.

The statement further said the government was determined to" assist a return to a situation of normalcy for residents in the area as quickly as practicable".

The Western Regional Minister, Mr Darko-Mensah, called for corporate support for the recovery and the reconstruction of the affected community.

He commended the Catholic Church for the quick support and urged those who had lost loved ones to be strong, assuring them that the "government will not let them down".

The Chief of Appiatse, Nana Attah Kojo Brembi II, commended the government for the prompt response and the promise that the community would be reconstructed.

“We are happy with the high-powered delegation from the government, commanders of various security heads in the country deployed to the area – we are grateful,” he said.

The Parish Priest of the St Michael Catholic Church, Rev. Fr Edward Cudjoe, said he was happy with the spontaneous response of support from parishioners.

He said the church was still creating space to accommodate more displaced people.

The Zonal Director of NADMO, Mr James Anfo-Mensah, said provision had been made to cater for their feeding.

“We have arranged with caterers in the community to provide breakfast, lunch and supper for them and we can assure you that they will be taken care of.”

He could not give the exact number of people at the shelter as the number kept swelling, saying that information would become available by close of day.

Mr Anfo-Mensah added that many of the victims were terrified, “therefore we will deploy a medical team to carry out some form of screening on them”, he said.

The explosion occurred at Appiatse, which is between Bogoso and Bawdie, after a motorcycle rider from the opposite direction ran under the van carrying the explosives.

According to police situational report, the motorcycle in the process caught fire, ignited the truck, which denoted the explosives estimated at about 10 tonnes, resulting in the blast.

The driver of the truck sustained a deep cut on the head and was rushed to the Tarkwa Government Hospital, while the police escort managed to escape the disaster.

The thunderous explosion caused extensive damage after levelling residential buildings. Most of the survivors were those who were far from the scene, on farms and on other errands.

The police added that vehicles plying the road were damaged, while many passengers and inhabitants sustained varying degrees of injury.