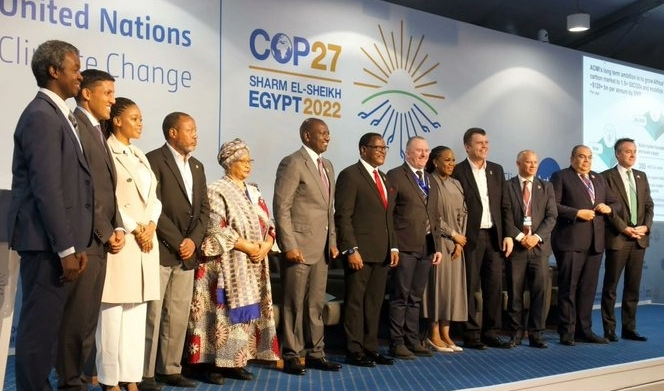 A new Africa Carbon Market Initiative (ACMI) has been launched at the ongoing United Nations Conference on Climate Change (COP27), aiming to support the growth of carbon credit production in African countries and to boost job creation.

Aside from this, the ACMI will see to the distribution of revenue in an equitable and transparent manner with local communities.


The ACMI was launched yesterday, with a 13-member steering committee of African leaders, chief executive officers (CEOs) and carbon credit experts, who would lead the process of expanding Africa’s participation in voluntary carbon markets.

The initiative was inaugurated at COP27, in collaboration with the Global Energy Alliance for People and Planet (GEAPP), Sustainable Energy for All (SEforALL), and the UN Economic Commission for Africa, with the support of the UN Climate Change High Level Champions, Dr Mahmoud Mohieldin and Nigel Topping.

In spite of this potential, Africa currently produces only a fraction of carbon credit capacity, according to the CEO of SEforALL, Damilola Ogunbiyi.

Ms Ogunbiyi said the current scale of financing available for Africa’s energy transition was far below what was required.

"Achieving the Africa Carbon Markets Initiative targets will provide much-needed financing that will be transformative for the continent," she added.

She said the ACMI would support credits that focused on equitable and transparent distribution of revenue to communities.

More than 100 African heads of state and governments, and over 45,000 international delegates converged on Sharm El-Sheikh in Egypt from last Sunday for the COP27.

On the eve of the two-week global event, Egypt’s presidency set the tone for the gathering with the illumination of the North African country's historic pyramids (tombs of great kings).

They lit up Khafre Pyramid, one of the three ancient pyramids of Giza that dates back 4,500 years, for COP27 ahead of the start of the global climate conference.

Expected to be one of the largest COP summits ever hosted, COP27 runs from November 6 to 18.

It started with the Climate Implementation Summit that will gather over 100 world leaders.

Experts in the climate change space say the COP in Egypt, which has been described as "make or break" because of the pertinent issue of loss and damage, will be focused on turning pledges into action for the benefit of future generations.

The Climate Action agenda being discussed at COP27 focuses on bringing the world together for implementation to ensure a just and sustainable future for all.