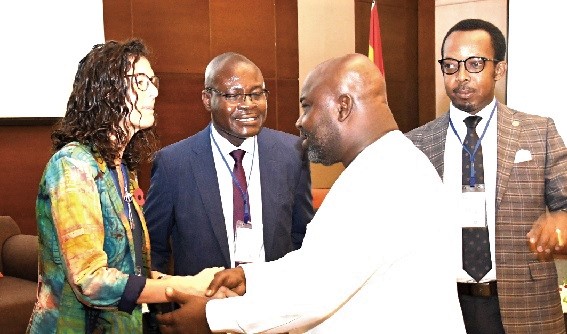 ichael Okyere Baafi (2nd from right), Deputy Minister of Trade and Industry in a handshake with Ms Harriet Thompson (left), the British High Commissioner to Ghana, during the Standards Partnership Pilot launch. With them are Prof. Alex Dodoo (2nd from left), President of the African Organisation for Standadisation and Director General of the Ghana Standards Authority, and an official of ARSO. Picture: EBOW HANSON
30.5k Shares

The Ghana Standards Authority (GSA), in collaboration with the British Standard Institute (BSI), has launched the pilot phase of a standard partnership programme to boost trade opportunities between the two countries.

It will also focus on strengthening national quality infrastructure of organisations and systems, in compliance with internationally recommended practices.

The programme, which is being piloted in Ghana and Rwanda, will also test concepts and pave the way for a possible expanded project encompassing additional countries in the coming years.

Funded by the UK’s Foreign, Commonwealth and Development Office (FCDO), the programme will also help deliver secondary benefits by enabling businesses to build resilience and diversify supply chains with high quality products and services, which will result in greater choices and lower prices of goods for consumers.

The programme is expected to end in March 2023.


It was launched in Accra yesterday on the theme: “Supporting business and sustainable trade in Ghana”.

In attendance were dignitaries from all three countries, including the Deputy Director of Trade for Development of the FCDO, Paul Wittingham; the AfCFTA Coordinator for Ghana, Dr Fared Arthur, and the Director of Standards Policy of the BSI, David Bell.

The Director-General of the GSA, Prof. Alex Dodoo, said standards represented extremely powerful and unavoidable means of transforming lives and livelihoods for the country and the continent as a whole, adding that it was the language of trade.

“To put it simply, no standards, no trade; no trade, no economy, and no economy, no jobs,” he said.

Therefore, he said, the partnership programme was a timely opportunity for the country to improve on its standards and quality infrastructure to enable it to expand trade with the UK and the rest of the world to create wealth for the people.

He further said it afforded the country the leverage to develop and deploy world-class goods and services in exchange for foreign exchange and other benefits.

A Deputy Minister of Trade and Industry, Michael Okyere Baafi, said the partnership would enable the standardisation body to develop the technical capacity to contribute to the government’s industrialisation agenda.

He said it would also provide local industries with the necessary tools to produce goods to meet international standards and practices and open them up to larger market audience.

The British High Commissioner to Ghana, Ms Harriet Thompson, said the programme was important because it would deepen the UK’s already existing special economic relations with Ghana, while boosting trade between the two nations.

“As we work towards this goal, we are focused on Ghana’s economic priorities and looking at where the British government can help make the most difference,” she said.

Ms Thompson added that the programme was a direct response to calls made by the government of Ghana through the UK-Ghana Business Council, saying it demonstrated that honest and open discussions among partners did generate results.