Fire ravages parts of Kantamanto ahead of festive season 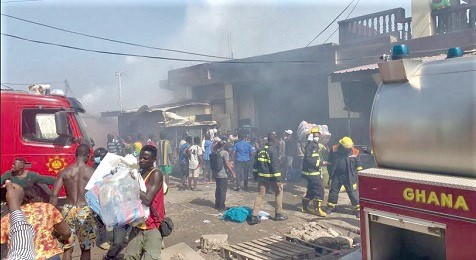 Some shop owners trying to salvage their wares
30.5k Shares

An outbreak of fire in the early hours of yesterday has destroyed shops and wares at the Kantamanto Market in the Central Business District of Accra.

According to eyewitnesses, the fire began around 3 a.m. and raged on for about four hours before the fire service managed to douse it.

The affected areas were shops that contained used clothing.

The cause of the fire is not yet known and there were no casualties.

Personnel from the Ghana National Fire Service (GNFS) used about eight fire engines as well as trucks carrying water tankers and battled for more than two hours before putting out the inferno.

The GNFS was assisted by a combined team of security personnel who cordoned off the busy business district so as to give free access to the fire personnel to work.

They also warded off scores of people who tried to have access to the scene and directed vehicular traffic to ease the congestion.

In spite of several warnings from the authorities, some shop owners tried to salvage the little they could.

However, some miscreants took advantage of the opportunity and attempted to loot the affected shops.

There were isolated incidents where the people engaged in a citizens’ arrest and one person was handed over to the police who handcuffed and took him away.

A victim, Isaac Kwame Owusu, told the Daily Graphic that he was on his way to the market when he got a call informing him about the outbreak.

He said he arrived to see his two shops, collectively containing about 50 bales of clothes each worth GH¢ 2,000.00, completely burnt.

“I procured a loan to enable me to purchase all my items, so I really don’t know what I’m going to do now,” he lamented.

“We beg the government to do something or else, we have no other help because there has never been a fire at this part of the market,” Mr Owusu added.

Another victim, Maame Akua, who operated a provisions shop, also told the Daily Graphic that she had lost wares worth GH¢50,000.00 to the fire.

“I owned two shops side by side, and I took a loan to purchase most of the items and now all my things are burnt.

I couldn’t even take my slippers, someone had to buy me a pair this morning,” she cried out.

Too early to determine

The Director of Public Relations of the GNFS, Timothy Osafo-Affum, addressing the media, said the GNFS received the distress call around 4:45 a.m and used appropriately six minutes to arrive at the scene.

However, he lamented that the call did not come in early and that contributed to the seriousness of the fire.

In a response to a question about the cause of the inferno, Mr Osafo-Affum said it was too early to determine what exactly started the fire although there were some speculations floating around among the people that the service was called earlier.

He said, to uncover the truth, thorough investigations were already underway by experts on the ground to discover what brought about the whole incident.

“If they happen to find a cause before we leave, you will be the first to know,” Mr Osafo-Affum assured the media.

For his part, the Minister for the Interior, Ambrose Dery, urged the affected shop owners to remain calm and assured them of government’s assistance.

He said he had personally received a call from the President to oversee the situation and assess the damages.

“You should be patient because we will deal with the matter and whatever report I get, I will send it up to the President and we will tell you what we will do.”

Mr Dery also encouraged the affected people to cooperate with the security services and help with the investigations to ascertain the cause of the incident.

The Chief Executive of the Accra Metropolitan Assembly, Elizabeth Sackey, reiterated the government’s support for the victims but first urged the people to stay calm and give the GNFS the needed room to operate.

“When we interfere with their work, it distracts them and so it becomes difficult even when it comes to writing a report,” she said.

“The IGP, Fire Service Commissioner and the Interior Minister are all here so that means we will strongly go to the table and take a firm decision for them,” Ms Sackey added.