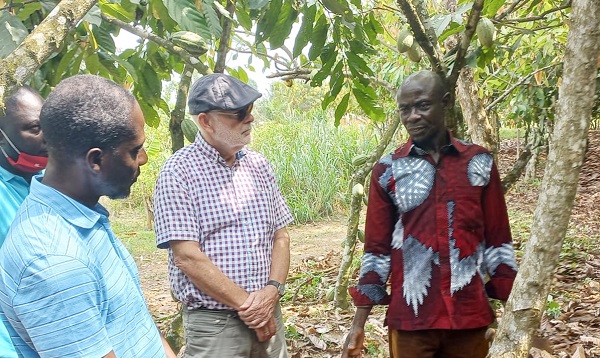 Jeroen Verheul (2nd from left), the Dutch Ambassador to Ghana, with Kwasi Adu (right), a cocoa farmer at Punikrom, on his irrigated cocoa farm Follow @Graphicgh

The Ghana Cocoa Board (COCOBOD) has appealed to stakeholders in the cocoa sector, particularly financial institutions and international non-governmental organisations, for support to upscale cocoa irrigation farming.

The COCOBOD piloted the irrigation farms some three years ago, and officials said the effort was successful but lamented that it would be difficult for many farmers to afford the financial requirements to establish such farms.

It, therefore, called for partnership and support to enable farmers to adopt the practice and be given enough time to repay the facility.

The Ashanti Regional Technical Director of the Cocoa Health Extension Division (CHED) of COCOBOD, Mr Kwadwo Osei Danso, made the appeal last Wednesday when The Netherlands Ambassador to Ghana, Mr Jeroen Verheul, paid a courtesy call on him in his office in Kumasi.

The call formed part of Mr Verheul’s three-day working visit to some cocoa growing areas in Ghana to acquaint himself with the works of the Cocoa Rehabilitation Intensification Programme (CORIP II) being funded by The Netherlands Embassy in Ghana and implemented by Solidaridad West Africa.

Mr Danso said the pilot project had proved very successful, and that there was the need to upscale it as part of measures to increase cocoa yield and also preserve land.

He said from the pilot, farmers would not need to cultivate large tracts of land to have more yields, stressing that with good agronomic practices, irrigated farms could produce four times the yield of land without irrigation, and the crop could also be produced all year round.

Mr Danso said COCOBOD was also implementing the cocoa rehabilitation programme in which overage trees were being replaced with early maturing and high-yielding species, while diseased farms were being cut down completely and the farms replanted.

He said both programmes were being undertaken simultaneously.

The Ashanti Region, he said, had more of the overage cocoa farms, while the Western North Region had most of the diseased farms — attacked by the swollen shoot disease.

He said many farmers were, however, unwilling to release their farms for the irrigation programme.

Under the rehabilitation programme, the government takes care of the cutting down of the trees and the replanting exercise, provides farmers with shade trees, such as plantain suckers, and also manages the farms for two years before handing them back to the farmers.

Mr Danso appealed to farmers to release their farms for the programme and also protect other farms from being infected with the disease.

A beneficiary farmer of the pilot project, 54-year-old Kwasi Adu of Punikrom in the Western North Region, lauded the irrigation idea, saying it had helped him to increase his yield.

He said before the project, he was harvesting a maximum of 30 bags from his seven-acre farm, but harvested 125 bags after employing the irrigation system and now planned to expand his farm.

He said if every farmer adopted irrigation farming, “cocoa will no longer be a seasonal crop but be produced all-year-round”.

He said the initial cost was, however, very high and expressed the hope that financial institutions would partner farmers to set up the irrigation systems and be given ample time to repay the loan.

Mr Verheul said he was impressed by the outcome of the programme and expressed the hope that the effort would be replicated to increase cocoa yield in the country.

He said aside from helping farmers to increase income, it would also tackle the impact of climate change on cocoa production in the country.

He said farming should be seen as a business and not just a way of life, and that farmers should be willing to invest in their farms.

Mr Verheul said The Netherlands would continue to support initiatives that would build the capacity of farmers and also help the youth become self-reliant.

The visit took him to four regions, where he interacted with beneficiaries of the CORIP and inspected some of the projects undertaken by the programme.