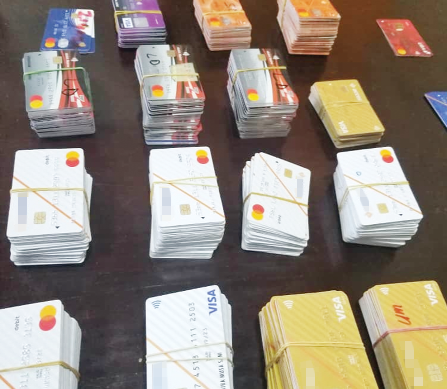 FLASHBACK: Some of the ATM cards retrieved from the suspect Follow @Graphicgh

The 42-year-old man, who was busted with 656 ATM cards connected to nine banks operating in Ghana and Nigeria, has been granted bail in the sum of GH¢200,000 with two sureties by the High Court in Accra.

This comes after several oral and written applications for bail by counsel for Bachir Musa Aminou.

Aminou, who has pleaded not guilty to two counts of electronic trafficking and stealing, has been on remand since September last year.

But in court last Monday, Mr William Brown, who held the brief for Aminou’s counsel, Theophilus Donkor, prayed the court to admit the accused person to bail.

The court presided over by Justice Lydia Osei Marfo, upheld counsel’s prayer and admitted Aminou to bail in the sum of GH¢200,000 with two sureties.

The sureties, according to the court, must be Ghanaians residing in Accra and must show evidence of earning a net monthly salary of not less than GH¢3,000.

In addition to this, the court ordered the seizure of Aminou’s passport which would be deposited at the registry of the court.

As part of the bail conditions, Aminou must report to the National Investigations Bureau (NIB) every Monday till the final determination of the case.

The case has been adjourned to March 23.

The facts are that Aminou, who is a Nigerian, was arrested at the Kotoka International Airport (KIA) for possessing 656 ATM cards in different names.

According to the prosecution, during interrogation, Aminou said the ATM cards were given to him by one Rabiu Suleman, based in the Kano State, Nigeria, to be given to one Baffa Bawarije, a Nigerian, who was based at the Daira Night City Hotel in Dubai.

On September 12, last year, Aminou was arrested while boarding an Ethiopian Airline en route to Dubai.

A search conducted on the accused, according to the prosecution, revealed 656 ATM cards bearing 656 different names issued by eight Nigerian banks and one Ghanaian bank

Investigations further disclosed that the accused person had first visited Ghana on April 29, 2021, through the Aflao Border and left for Dubai on May 26, 2021.

The accused person’s second visit to Ghana was on August 20, 2021. However, he was arrested on the day of his departure to Dubai.