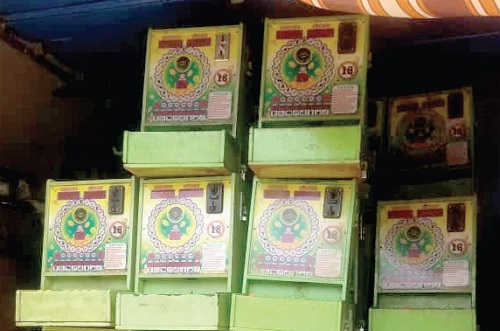 The Gaming Commission of Ghana has clamped down on unauthorised operators, seizing hundreds of unsanctioned "slot machines" (Jackpots) in Kumasi as part of moves to sanitise the industry, in line with international practice.

The action is also aimed at phasing out all analogue gaming machines from the system.

It is also to monitor and protect minors from gaming, as well as help curb the exploitation of the vulnerable.

The Public Affairs Manager of the Gaming Commission, Beatrice Baiden, said the exercise followed a ban on all analogue and non-digital machines and the need to ensure compliance.

She said the core mandate of the commission was to regulate, control, monitor and supervise the operations of games of chance in the country, except lottery.

“The commission, in 2018, issued a notice to all gaming operators on its intention to phase out all analogue and non-digital slot machines on the gaming landscape in Ghana, which most of the operators have failed to comply with.

"All those who flout the law from January 1, 2022 and beyond will have their machines confiscated," she added.

Ms Baiden disclosed that the commission was working with other government agencies, such as the Local Government service, in collaboration with district assemblies, to ensure that business operating permits were not issued to illegal gaming operators in their localities.

She said it had also engaged gaming operators on the directive and given them the opportunity to adopt conventional digital machines of international standards.

"The commission is committed to ensuring and enforcing responsible gaming in the country," she said.

She appealed to members of the public to report such miscreants to the appropriate authorities for action.

She further cautioned that anyone found to have flouted the directive would be dealt with according to the law.