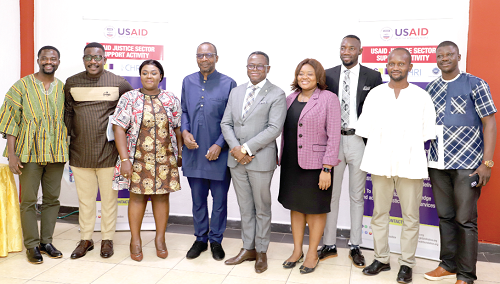 Justice Emmanuel Yonny Kulendi (5th from right), Justice of the Supreme Court, and Mr Roland Affail Monney (4th from left), President of the Ghana Journalists Association, with the media ambassadors after the event. Picture: GABRIEL AHIABOR

A Justice of the Supreme Court, Justice Emmanuel Yonny Kulendi, has described as outrageous conditions imposed by some judges before granting bail to accused persons.

“A judge can grant bail in the sum of GH¢100,000 with three sureties, two to be justified and two of them must be civil servants. Which law says that one has to be a civil servant to bail an accused person?” he queried.

Justice Kulendi also raised issues with some judges who he said needlessly remanded people in police and prison custody when such suspects could have been granted bail.

According to him, remand ought to be for people who were not likely to appear before a court to answer charges, and should, therefore, not be used as a form of punishment.

Justice Kulendi further said that bail conditions, unnecessary remand, coupled with extortion and corruption in the criminal justice system demonstrated how unfair and wicked people could be towards their fellow human beings.

Justice Kulendi was speaking at the introduction of media ambassadors for a Ghana Case Tracking System (GCTS) in Accra on Thursday, October 21, 2021.

The system is an integrated case tracking, information and notification system that allows all the major players in the criminal justice system to keep abreast of the status of criminal cases right from the police station until final judgement by the law courts.

It seeks to promote transparency in the criminal justice system and prevent issues such as missing dockets.

Institutions utilising the system are the Ghana Police Service, the Judicial Service, the Prisons Service, the Attorney-General’s Department, the Economic and Organised Crime Office (EOCO) and the Legal Aid Commission.

They are expected to use their platforms and influence to educate the public on the GCTS.

The event formed part of a USAID Justice Support Activity which provides support to the GTCS.

It was organised by USAID, in partnership with the Legal Resources Centre, the Commonwealth Human Rights Institute (CHRI), Crime Check Foundation and the Inter-regional Bridge Group (IBG).

Justice Kulendi said he had suggested to the Judicial Service to intentionally cause the arrest of judges and have them remanded so that they could feel the conditions accused persons went through when they were remanded.

“If judges have that experience and other human beings are standing in front of them, they would understand what it takes to be on remand,” he said.

According to Justice Kulendi, there was a fundamental problem with accused persons being remanded for many years when such accused persons per the Constitution were presumed innocent until proven guilty.

He said only criminals must be kept in prison to suffer for their crimes, and not people who had been accused of crimes.
Justice Kulendi further said it was an indictment on the criminal justice system that some accused persons were made to be on remand for periods longer than what they would have spent in jail had they been convicted by a court.

“Let’s make only those who must be kept in prison be in prison. If a person has not been found guilty, he should not be needlessly remanded,” he said.

The Director of the Office of Democracy, Human Rights and Governance of USAID, Ms Audra Lykos, expressed appreciation to the media ambassadors for accepting the role of reforming the criminal justice system.

“A strong justice sector is vital for Ghana’s development, resilience and self- reliance,” she added.