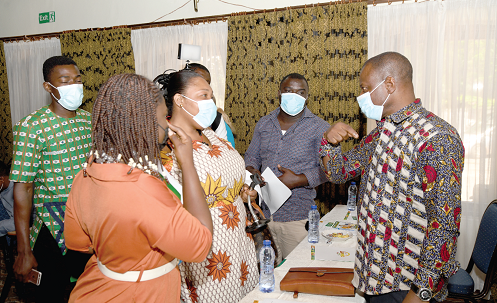 The second phase of the COVID-19 vaccination plan will begin from Tuesday, October 26, 2021, to the first week of November.

The exercise targets members of the public of 18 years and above apart from expectant mothers.

The exempt group, authorities say, will eventually be vaccinated upon adequate scientific evidence of safety.

The first phase covered the vaccination of all identified vulnerable groups and key population.

The Director-General of the Ghana Health Service (GHS), Dr Patrick Kuma-Aboagye, made the announcement at a media orientation in Accra yesterday ahead of the exercise.

He said the country was on course to reach herd immunity of the 20 million people.

“The GHS has started to expand the vaccination exercise to the general population in order to achieve herd immunity and subsequently reduce the burden of the disease. Currently, over two million people in Ghana have received at least a dose of COVID-19 vaccine,” he said.

Dr Kuma-Aboagye reassured the public that both international and national due diligence had been done to ensure only safe and efficacious vaccines were administered and pleaded with the public to disregard supposed myths and misconceptions about the vaccines and to present themselves for the jabs.

He said vaccination had proven to be the most efficient method of breaking the transmission chain of the disease when used to complement other safety protocols.

He said 98 per cent of people affected and hospitalised under the third wave plus majority of the deaths were among persons who had not taken any jab at all.

He said getting vaccinated against the disease came with benefits such as protection against severe illness, hospitalisation and death.

The Manager of the Expanded Programme on Immunisation, Dr Kwame Amponsa-Achiano, said so far, the country had taken delivery of 7,339,330 doses of COVID-19 vaccines.

He said as of last Thursday, 2,842,857 doses of vaccines had been administered nationwide.

He said close to 3.6 million were currently in stock to be deployed for the second phase.

Dr Amponsa-Achiano said all was set for the country to take delivery of additional 4.5 million doses by the close of November this year.

The Country Representative of the World Health Organisation, Dr Francis Kasolo, said all countries in Africa had experienced at least two waves of the pandemic since the disease broke out on the continent on February 14, 2020.

He said the major interventions since the onset of the pandemic had been largely non-pharmaceutical.

“Implementation of public health measures such as wearing of masks, frequent washing of hands and physical distancing have seen varying levels of success across different countries due to variety of factors, especially poor public compliance,” he said.

He said the vaccine deployment had not been without challenges because there were still people who were hesitant about the vaccine mainly due to lack of information, disinformation or misinformation.