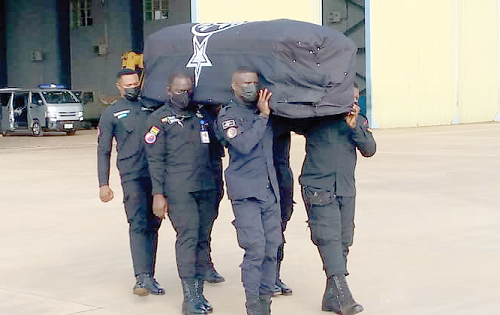 The mortal remains of two policemen, who died in a road accident in the North East Region in the line of duty, have been airlifted from Tamale to Accra for burial.

Three other officers who were injured in the accident have also been flown to Accra for further treatment.

A short ceremony was performed at the Tamale Airport in honour of the deceased before they were evacuated.

The arrrangements followed a visit by the Inspector-General of Police, Dr George Akuffo Dampare, to Tamale yesterday to see the condition of the survivors of the accident.

The Northern Regional Police Public Relations Officer, Superintendent Bernard Baba Ananga, told the media after the short ceremony that the visit by the IGP had boosted the morale of officers in the region.

Chief Inspector James Akakose Aroma and Corporal Nii Osekle Charles were the policemen on board the vehicle with registration number GP 437 who died.

The accident occurred on the Walewale-Bolgatanga road.

The policemen were members of the anti-robbery squad who were responding to an emergency on that stretch at about 5 p.m. because some armed robbers had blocked the Karimenga section of the road and were robbing passengers and the officers were pursuing them.

The driver of the police vehicle is said to have lost control, leaving the vehicle to veer off the road and crash, killing the two officers on the spot.

Dr Dampare was accompanied by members of the Police Management Board.

Earlier, the IGP and the Police Management Board had consoled the families of the deceased officers.

Meanwhile, the police administration has expressed appreciation to the Ghana Armed Forces, particularly the Chief of the Defence Staff, Vice Admiral Seth Amoama, and the Chief of Air Staff, Air Vice Marshall Frank Hanson, for their collaborative efforts in offering quick support for the injured officers.

The North East Regional Police Public Relations Officer (PRO), Assistant Superintendent of Police (ASP) Robert Anabiik Angmain, in a media briefing, assured officers in the region that the police administration and the regional command would do everything possible to ensure their safety on duty, adding that “ the deceased will be given befitting burial, while the injured personnel will be given the needed treatment”.

He said the police had also commenced investigations to apprehend the robbers.