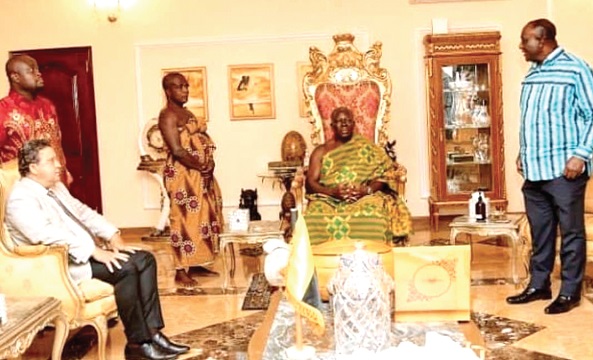 THE outgoing Minister of Trade and Industry, Alan Kwadwo Kyerematen, has appealed to the Asantehene, Otumfuo Osei Tutu II, and traditional leaders in the Ashanti Region to support President Akufo-Addo’s vision to create an industrial park in the region.

He said the park, to be known as the Greater Kumasi Industrial City and Special Economic Zone, would be sited in the Ejisu municipality and would be one of the legacy projects of the government.

Already, he said, a 5,000-acre land had been secured for the establishment of the zone.

The World Bank is supporting the project with $30m, which will include the development of an off-site infrastructure.

Mr Kyerematen made the appeal when he led a delegation that included some officials of the World Bank to pay a courtesy call on the Asantehene and seek his support for the successful implementation of the project.

The delegation included the World Bank Country Director, Pierre Laporte, and some members of staff of the Ministry of Trade and Industry.

Mr Kyerematen said the project was a collaboration between the government and the World Bank, and that the objective was to create an economic zone to create jobs and spur the growth of the country.

“The purpose of this visit is to inform you about the landmark project which the Ministry of Trade and Industry has initiated, with the support of the World Bank, to establish a Greater Kumasi Industrial City and Special Economic Zone.

“We want this new project to be the prime investment destination and manufacturing hub in the country,” he added.

In addition to the contribution of the World Bank, he said, the government was also seeking a $150-million loan from South Korea to invest in the off-site infrastructure of the project.

Mr Kyerematen explained that the government selected the region for the project due its strategic location as the confluence of almost nine regions in the country.

“It pulls together not just the Ashanti, Western and Eastern regions, part of the Central Region and beyond Ghana; it is also a transit corridor to some neighbouring countries, such as Niger, Mali and Chad,” he said.

He further said the industrial zone would be strategically located close to the Boankra Inland Port site to open up the area for industrialisation.

“We are going to establish an agro-industrial hub which will concentrate on producing many items, including fruit juice.

“There is also going to be a pharmaceutical park and a technology innovation centre to replicate the Silicon Valley concept,” Mr Kyerematen added.

The outgoing minister also used the opportunity to inform the Asantehene about his resignation from the government to concentrate on his presidential ambition.

Mr Kyerematen said he would formally go to Otumfuo to seek his blessings to lead the NPP at its presidential primary this year.