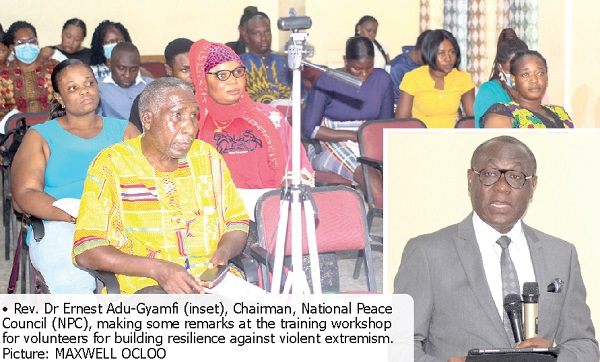 The National Peace Council (NPC) has inaugurated 40 ambassadors to help prevent violent extremism in selected communities in the southern part of the country.

The volunteers, who have undergone training, were selected from five communities — Ashiaman, Nima, Odododiodoo and Ayawaso, all in the Greater Accra Region, and Techiman in the Bono East Region.

The initiative is under a project dubbed: “Preventing violent extremism: The gender perspective and women’s role”, which began in August 2022.

It is aimed at building resilience against violent extremism and targets women, the youth, political parties and persons with disabilities.

Violent extremism refers to activities that condone and enact violence on ideology or with deliberate intent. It includes religious and political violence.

Addressing participants at a two-day training and inauguration of the ambassadors, the Chairman of the NPC, Rev. Dr Ernest Adu-Gyamfi, charged the volunteers to work towards preventing violent extremism in their respective communities.

He said the volunteers would be equipped with soft skills to sensitise the people and promote safe space that would enable peaceful co-existence and also support healthy engagements.

They would be trained in mediation, arbitration, conflict analysis and effective communication to enable them to handle and manage situations from violent extremism, he said.

He said they were also expected to sensitise members of their various communities to the need to build resilience against any attempt at patronage, recruitment and indoctrination of individuals or groups in behaviours that would lead to radicalisation and violent extremist activities.

“You will also be expected to provide early warning signs to enable the council and other relevant authorities to give responses to protect the peace and security of the country," Rev. Dr Adu-Gyamfi said.

He further urged the volunteers to be strategic in their communication, "so that communication does not lead to unnecessary panic, but rather open the minds of your community members to the destructive nature of any violent action".

He commended Global Affairs Canada and the Canadian High Commission in Ghana for providing financial support for the council to implement the project.

The Deputy Director in charge of Conflict Management and Resolution at the NPC, Frank Wilson Bodza, said the communities were selected based on the high population density, the high penetration of economic activities in those areas, among other factors.

He explained that the project was focusing on the youth because they were the “central pillar” of violence and extremist activities, while women and children were the most affected by violence.

He said political party representatives were also involved because they had a role to play in curbing violent extremism in the country.

According to him, perpetrators of violent extremism took advantage of communities with disputes to perpetrate their activities.

"We are focusing on the prevention of conflict because we do not want it to happen at all. It is always better to prevent than to cure.

On behalf of her colleagues, a volunteer from Ashiaman, Phyllis Lamisi Atiah, expressed appreciation to the council for reposing confidence in them.

She pledged that they would work hard to justify their selection, while entreating the council to support them with the needed resources.