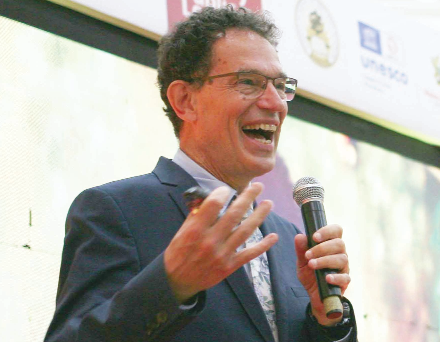 A Physicist with the University of Edinburgh in Scotland, Professor Neil Turok, has predicted a bright future for African youth to excel in the field of science.

That, he said, was because African youngsters were more motivated and thirsty for the acquisition of knowledge and had the aim of wanting to do better with every opportunity with which they were presented.

“Ten, 20 years from now you are going to see young Africans in every field of science doing pioneering work; there is no question about it. They are more motivated than other young people from other continents,” Prof. Turok, who is the Higgs Chair of Theoretical Physics at the University of Edinburgh, said at the Francis Allotey Public Lecture organised by the African Institute for Mathematical Sciences (AIMS), Ghana at the Ghana Academy of Arts and Sciences in Accra last Tuesday.

The lecture, on the theme: “Developing versatile and innovative STEM leaders for Africa’s scientific excellence and socio-economic development”, formed part of the 10th anniversary of AIMS Ghana.

It was in honour of the late Prof. Allotey, the first President of AIMS Ghana, and coincided with his birth date, August 9.

Prof. Turok, who is also the Founder of AIMS and Chair of the AIMS International Governing Board, presented a paper on: “The universe and what it is teaching us.”

He noted that African scientists had a crucial role to play in addressing the problems faced on the continent, for which reason there was the need for more Africans to go into the field of science, since they were in communities worst affected by global problems.

“When they get into science, they will do so in the interest of their communities and they will help protect those communities,” he said.

He indicated that having more Africans in science would help, as they would always be out to use the experiences and challenges in their communities as case studies that needed resolution.

“If a young African who has grown up in a poor community studies science, the first thing he wants to do is use it to help his community,” he said.

Africans in the field of science, he noted, knew the communities that were dying from HIV/AIDS, tuberculosis, malaria or COVID-19 and would want to dedicate themselves to saving the lives of their people.

“So when young people take up science in a big way in the hundreds of thousands, they will actually change the way science is done because science needs to change,” Prof. Turok said.

The physicist said the world was not making use of science wisely, and that although it had used science to make automobiles and things people use in modern life, “we are not protecting the planet but rather destroying our future by destroying the environment, emitting dangerous gasses into the atmosphere, causing climate change”.

Prof. Turok said the world was in a parallel state, and that even the COVID-19 pandemic was a consequence of agriculture not being managed properly, so that animals were kept in a very bad condition, with diseases spreading from wildlife to animals and ultimately making humans sick.

He said the world needed to control the way it used science and suggested the need to get representatives from African communities into science because they understood the problems and the parts of communities worst affected by those global problems.

In a tribute, a board member of AIMS, Prof. Esi Awuah, said the late Prof. Allotey used his links to source scholarships for several young people who were willing to pursue excellence in their academic careers.

A Deputy Minister of Education, Rev. John Ntim Fordjour, described the late Prof. Allotey as an immortal asset and treasure not only to Ghana but also Africa and the entire world.

The Chancellor of the University of Dundee, Prof. Dame Jocelyn Bell-Burnell, had earlier made a presentation on: “Bursts, bangs and things that go bump in the night — The new field of time-domain astronomy”.

The President of AIMS Ghana, Dr Prince Osei, said, among other things, that the pan-African organisation had graduated 500 students from 27 African countries, with 33 per cent of them being females.

He and the late Prof. Daniel Afedzi Akyeampong were the first Ghanaians to obtain doctorate degrees in mathematical sciences in 1966.

Prof. Allotey was known for the ‘Allotey Formalism’, which arose from his work on soft X-ray spectroscopy.

In 1973, he was honoured with the UK Prince Philip Golden Award for his work in that area.

He was also the founding director of the KNUST Computer Centre before he assumed office as the Pro-Vice-Chancellor of the university.