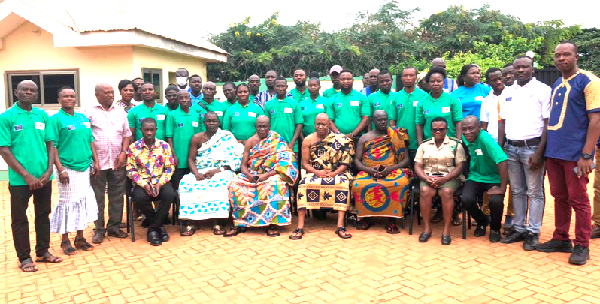 Members of the Land Management Board, officials of EcoCare Ghana, Tropenbos Ghana and chiefs who graced the occasion
30.5k Shares

The Nifahene of the Techiman Traditional Area, Nana Boakye Ameyaw II, has called for the inclusion of traditional methods in measures to conserve the country's forest reserves for posterity.

He observed that formally, the institution of taboo days during which people in some communities were barred from going to the farm or entering forest reserves, among other methods, helped to conserve the country’s forests.

Nana Ameyaw II said even though tree planting, among other afforestation methods, had been adopted to ameliorate the effects of the fast depletion of the country's forest reserves, the reintroduction of traditional methods would be a welcome addition.

He stated that the current visible effects of climate change called for the combination of both traditional and modern methods to conserve Ghana's forest reserves.

Nana Ameyaw was speaking during the inauguration of a land management board to implement the Landscapes and Environmental Agility Across the Nations (LEAN) project in the Techiman North Municipality last Monday.

The objective of LEAN is to support national efforts to conserve biodiversity, improve the livelihoods of small-scale resilience, and reduce emissions from land-use changes across Ghana's savannah, high forest and transition zones.

It is a four-year project funded by the European Union and focuses on the establishment of landscape governance structures; conservation and restoration of biodiversity.

Nana Ameyaw lauded Ecocare Ghana and Tropenbos for their efforts to assist people in the area to plant trees to conserve the environment and gave assurance that chiefs in the area would partner the two non-governmental organisations (NGOs) to achieve the objectives of the project.

He said it was unfortunate that many tree seedlings, which had been planted over the years, had been left to die due to poor maintenance culture and called for measures to sustain efforts to maintain the country's forest reserves.

He said the intervention of EcoCare Ghana and Tropenbos was timely, since forest reserves in the six beneficiary districts, which were in the transition zone, were depleting fast.

The LEAN Project Coordinator for Tropenbos Ghana, Daniel Abu, said 10 communities in each of the beneficiary districts had been selected to participate in the project.

"Our mandate is to help the government recapture our forest reserves which are fast depleting. We are going to plant trees; we are going to use climate smart agriculture to recapture the forest," he stated.

Mr Abu said that the management board which had been elected would develop an action plan and implement it thoroughly to achieve the project's intended objectives.