Retiree goes back to school to protect a special daughter

It’s half past midday and Mr Collins Aning Agyei is seated under a tree behind the Klicks Africa Foundation at Dome Pillar 2, a suburb of Accra , scanning through local radio stations on his mobile phone to while away the time.

His 15-year-old daughter, Maame Akrasi, is on a scholarship at the Vocational Training and Resource Centre for youth with special needs run by the foundation, and every weekday, the retiree who turns 68 in August spends hours waiting for her.

Mr Agyei and his family live at Adjei-Kojo Suncity,near Ashaiman, and for close to two years, he and his daughter commute to and from the centre via public transport.

Maame has down syndrome — a genetic disorder associated with physical growth delays, characteristic facial features, slow developmental and intellectual ability and needs support and supervision to do activities most teenagers her age do without support.

Due to her condition, her father who is on retirement accompanies her to the centre and waits till about 2p.m. when the school closes to send her home. 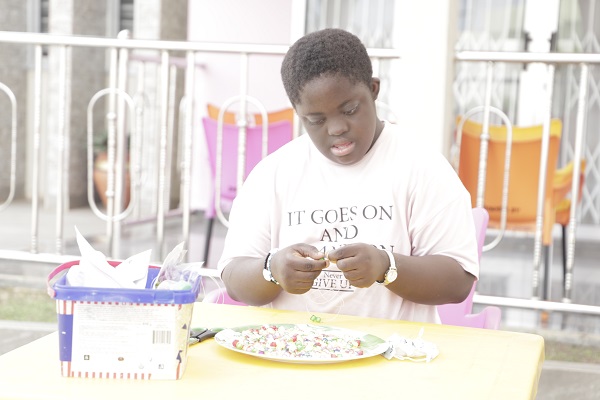 Maame Akrasi's favourite activity at the centre is beading

Mr Agyei himself is not too fit and limps a bit but ignores his ill health so that his daughter can be trained to be independent and learn a skill.

“My wife sells yam in Accra and supports the home with her earnings. One of my older sons also sends us money occasionally to support us and since I’m the one with some free time, I decided to accompany her each day,” he told The Mirror in an interview last Wednesday.

Only female child
After having six male children, the birth of his first and only female child brought him and his wife lots of happiness but their joy was interrupted (not lost) when the midwife who delivered his wife of her baby called him to inform him of his daughter’s condition.

He recounts that at birth, Maame had distinct features indicating down syndrome and they were counselled to prepare for the journey ahead.
Mr Agyei said the news was unpleasant but he was thankful to God.

“Any parent who finally births a girl after six boys will definitely be happy but our situation was one of mixed feelings. We were happy but still worried about what the future holds as the health professionals explained to us what to expect.”

He said aside the visible facial features, they were told of a possible delay in developmental and intellectual abilities which started a few months later.

“With the boys, by eight months old, they had started standing or walking with little assistance but with my daughter, she couldn’t even sit without support after age two and started standing unassisted by three years. Eventually when she started walking, she dragged her feet for a long period. Her speech also delayed and for many years, all she could say was “Mama,” he narrated.

He said doctors suggested that they visited different specialists but he couldn’t afford the costs involved in attending these special clinics.

At that time he worked as a laundry man at the Volta Hall of the University of Ghana and his salary couldn’t support his elder children in school and also pay bills at these special clinics.

“Her food is even expensive than what we all consume at home. We had to put her on a diet to prevent complications and all these came at a high cost. There are periods some of the meals she likes are out of season but we have to find some at outrageous prices since that is all she will eat.

Unlike my other children, she couldn’t go to mainstream schools so we managed her at home and tried to teach her some basic activities,” he narrated.

Education
Around age 10, she was enrolled at AwaaWaa2, a centre for children with special needs at Haatso in Accra under sponsorship by Mrs Mary Amoah Kufour, CEO of Klicks Africa Foundation, who was then a manager at the AwaaWaa2 centre.

“During that period, we lived at Ofankor and I accompanied her to the centre each day like I do here but it wasn’t as stressful as the distance was not long like what we do now. After sometime, we tried moving her to a mainstream government school but we didn’t see any improvement after two years so we decided to train her at home,” he said.

In March Last year, the Aso Tawiah Foundation, an organisation which works closely with Klicks Africa Foundation by providing funds for needy children with special needs to go through therapy, chose to sponsor Maame at the youth centre. 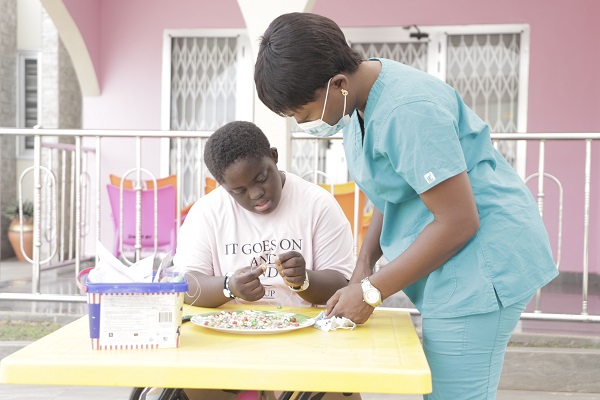 At the centre, she is taught skills such as cooking, sewing, bead work, art work, writing, reading and how to interact with others.

Mr Agyei was full of praise for her sponsors, saying , “There have been great improvement since she joined the centre. She is more sociable and can do many activities unassisted. Prior to joining the centre, she hardly spoke but these days, she makes attempts to communicate and is able to say some words confidently.

In addition to the scholarship, they sometimes receive financial donations from the foundation to support the cost of transportation. 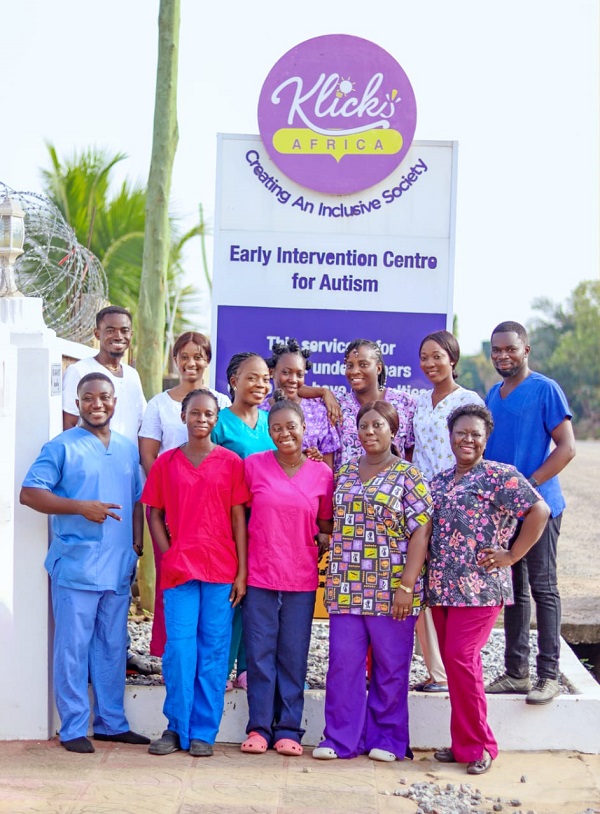 Financial burden and challenges
Each day, they both spend about GH¢60 on transportation to and from the centre. This would have been higher if Mr Agyei was not using some shortcuts to cut down on money spent.

“Some trotro mates on our route who know us always fight me for cutting corners but I pay no attention to them as I must manage the little money we have and occasional donations from people.

“My monthly pension payment from SSNIT cannot sustain us through the month. I always have to borrow from the MTN Mobile Money to supplement it. Sometimes one of my sons also send us some money to support us. Cost of transportation keeps increasing and there are days we have to board a taxi which is more expensive,”he said.

Aside the financial challenges, the two sometimes struggle to get vehicles to their destination and the situation becomes worse when it rained.
Mr Agyei has purchased a rain coat which they use on rainy days. The bad nature of the roads leading to their home also contributes to their struggles on rainy days. 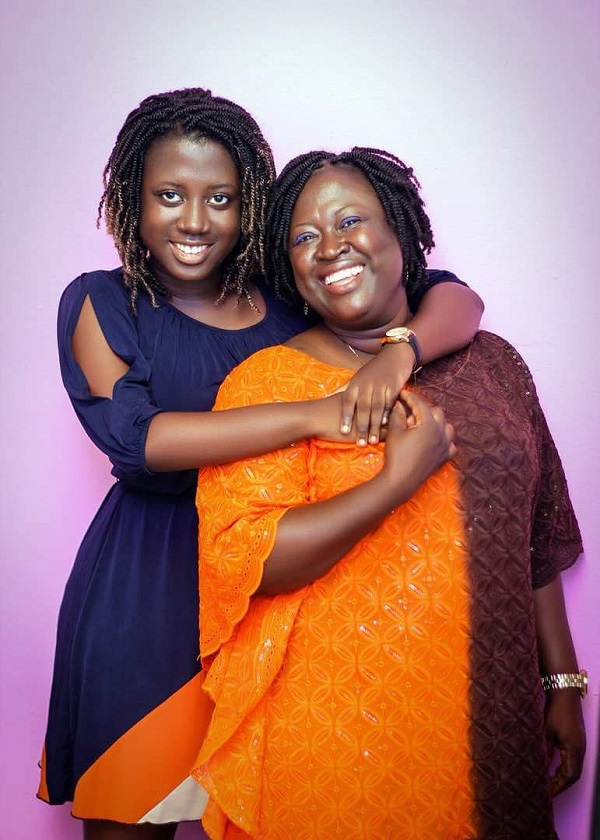 This father also tracks his daughter’s monthly menstrual cycle to prevent any accidents, explaining “because I’m with her most of the time, I know her cycle and her mother prepares her and teaches her how to use sanitary pads but occasionally, we have some accidents. In such circumstances which is rare, I have no option than to charter a taxi straight home.”

Dedication
He recounts that back at the AwaaWaa2, a man nearly manhandled him while he (Mr Agyei) was waiting for his daughter.

“He said I was an old crook, a spy who loiters about monitoring people’s homes for robbers to attack them. Even here, recently, a young truck driver who I prevented from urinating in the open space also hurled insults at me. 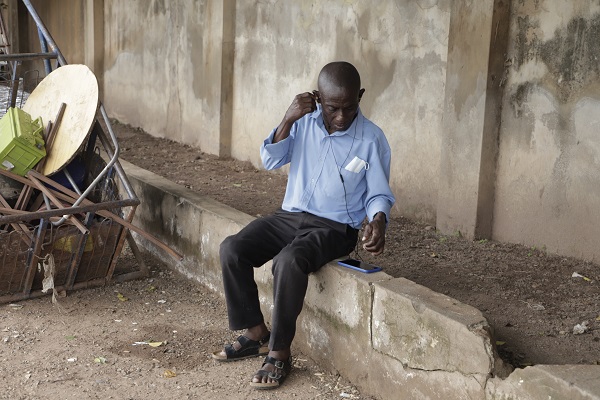 Mr Agyei usually listens to radio to while away time, PICTURES: EDNA SALVO-KOTEY

“It has not been an easy journey. There are days I feel weak and tired but I’m determined to support my girl till she can be independent. She can’t communicate well so if someone harms her, she can’t express herself or fight back. She learns a lot here and I will do all I can to support and protect her. The journey has been tough but I am always grateful to God for her life, I have seen other children with special needs and I always say we are blessed because it could have been worse, “he noted.