Do you still believe in your national pledge? 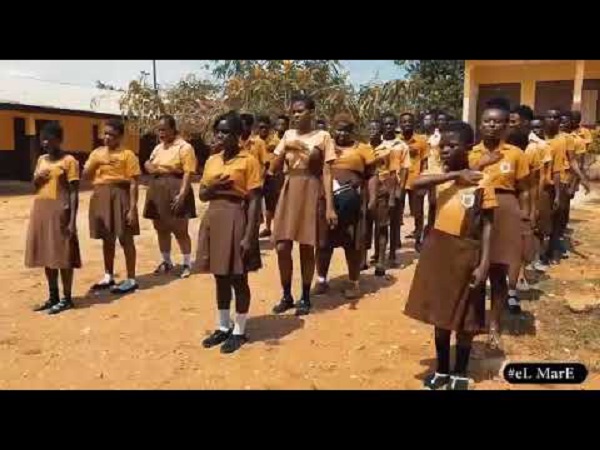 Some schoolchildren recite the pledge every morning
30.5k Shares

This week, I visited a primary school in a nearby neighbourhood while touring with our latest animation book, Animuonyam The Bully Stopper.

I observed how students recited the national pledge with such confidence and passion. Indeed, they were ready to lay down their lives for their ‘beloved’ nation… if given the opportunity.

I could only imagine how they would perceive the motherland they had promised to be faithful and loyal to if they came to the sad realisation that their Basic Education Certificate Examination (BECE) mysteriously leaked every year. While they will see the examination papers for the first time in the exam hall, others will be seeing it for the last time in the same exam hall. I wondered if they would still be hoisting the flag of this nation high when they got to their mid-twenties and it dawned on them that getting a decent job in this country was as hard as a camel going through the eye of a needle.

The national pledge has become like a folktale. You loved it so badly as a child. As reality and adulthood catch up with you, you want to have nothing to do with it.
I cringed when I heard them pledge to defend the good name of Ghana even at their peril. I could only wonder if they would still be committed to this pledge the fateful day they realise that some people in power can get away with almost every atrocity they commit.

You see, bad systems make good people corrupt. Many young people, like these students, have given up on this nation after being given several reasons to. We don’t expect young men and women to put their lives on the line for a country where it costs an arm and leg to rent a decent place to live let alone buy a piece of land.

No sane being will pledge their allegiance to building a nation that spends prodigally when its young people are suffocating in Nation Builders Corps (NABCO) where they could serve for months yet remain unpaid.


If we want people who will go every length to die for this nation, this nation must, at least, show that it will go every length to die for them too.
Bad systems like good ones are created by people. Whenever you see a nation prospering, it points to the fact that the people, especially leaders, have intentionally put in place systems that can benefit everybody and not just those in power. Bad systems benefit only some classes. Good systems benefit the masses.

In a country of bad systems, there are only a few good people. Majority of them eventually give up and give in. They observe how the rot benefits those who work less. They see how politics makes those drowning in poverty rich overnight.
They daily read about how those behind galamsey actually pretend to be fighting the menace, giving no hoot about posterity.
When bad systems are created by those at the top, good people may be forced to find a dubious way to go around these systems. Though they detest corruption, circumstances force them to wine and dine with it.

When the duty of their goods costs multiple times those goods, for instance, they find a way of getting their goods anyway but pay less, hence, enriching someone else instead of the government.
Day in and day out, a few good people out there do everything within their power to stay committed to the national pledge. They, however, give up after keenly observing that their leaders who are supposed to be an embodiment of this pledge have thrown the pledge to the dogs.
Bad leadership is evident wherever basic necessities become a privilege. These basic needs become a need that people struggle to meet.

It will take a great sense of leadership to build this nation again. To have the masses have faith again in the pledge they once made to this homeland, it will mean the leaders will first need to relive this pledge.

It is an irony how people who complain about the state of our country do worse when given the opportunity to lead it. It is as though everyone is waiting to have their bite of the national cake. This kind of leadership only empowers those who are watching on to be even more corrupt.

Someone needs to break this vicious cycle of raping the nation at the least opportunity. It will take exemplary leadership to empower citizens to have hope in Ghana again; a kind of leadership that will uphold the dignity of Ghanaians above even the party that brought them to power.
If we want Ghanaians to still believe in the national pledge, we must see a leadership that believes in the pledge too.

The future of Ghana is in the hands of its future leaders; today’s followers. Until they have a different mindset about our collective interest, it is sad our nation will keep growing from bad to worse.
The ugly future of this nation is not because of its current corrupt leaders. It is because of the more corrupt followers waiting to take over.

The time to instill a sense of national pride into today’s followers is now. If we want them to promise in their honour to defend the good name of Ghana, we must be certain that our current leaders are doing the same. The loyalty of a people to a country lies in the loyalty of the country to them.
Do I still believe in the national pledge? Well…

The writer is a playwright and Chief Scribe of Scribe Communications, an Accra-based writing company (www.scribecommltd.com). Order for copies of his animation book, Animuonyam The Bully Stopper, via 0243752793.