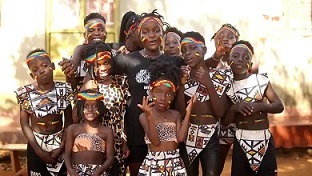 Uganda’s Dancing sensations, the Triplets Ghetto Kids are on cloud 9 after being given an all expense paid trip to Qatar ahead of the 2022 FIFA world cup finals which are just about to kick off.

The Ghetto kids had a dream to perform at the Qatar world cup opening ceremony and they chose to get creative an act which paid off and now they are ripping the dividends of their hard work.

The Ghetto Kids recorded a video displaying their creativity in expressing what they anticipate the FIFA world cup 2022 could turn out to be. The Video with the sound track of the the official FIFA world cup 2022 song Hayya hayya which features Aisha, Davido and Trinidad shows a good, funny, hilarious and very entertaining choreographed dance moves that illustrate exactly how the Qatar world cup will be action packed.
They then went ahead and shared the video in the right places while tagging the event organizers of the Qatar world cup 2022. Lady luck smiled on them, the clip went viral and reached well placed individuals who were impressed with their creativity hence offering them an all expense paid trip to Qatar.

They arrived at the Qatar airport, to a lit welcome before they were taken to other dignitaries who offered them some goodies.

The Ghetto kids have so far taken time to visit different towns and football stadiums where the world’s most prestigious showpiece tournament will be taking place.

They also took photos with some of the accolades that will be awarded to the best player, best goalkeeper, and top scorer among others.


The world cup finals are set to get underway on the 20th of November through to December 18th, with 32 teams confirmed to compete in eight groups.

Hosts, Qatar take on Ecuador in Group A at the Al Bayt Stadium as the opening game of the showpiece. England faces Iran on the second day of the tournament while Wales faces the USA.