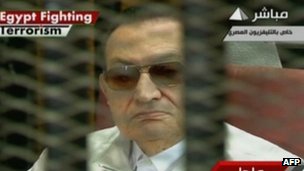 The former Egyptian President, Hosni Mubarak, has appeared in court, three days after being released from prison and placed under house arrest.

Mr Mubarak is facing a retrial on charges of complicity in the killing of protesters during the 2011 uprising.

He sat in the defendants' cage along with his two sons, former interior minister, and six security chiefs.

Earlier, the separate trial of the Muslim Brotherhood's general guide and his two deputies was adjourned.

The court convened briefly and made its decision because Mohammed Badie, Khairat al-Shater and Rashad Bayoumi and 32 other defendants were absent for security reasons.

Their presence was requested for the trial's resumption on 29 October.

The Brotherhood leaders face charges of inciting the murder of protesters who stormed the Islamist movement's headquarters in Cairo on 30 June as millions took to the streets demanding the resignation of Mr Mubarak's democratically elected successor, Mohammed Morsi.

Mr Morsi was deposed by the military three days later and is being detained while prosecutors investigate allegations related to his escape from prison during the uprising that forced Mr Mubarak from power, including that he conspired with the Palestinian militant group Hamas.