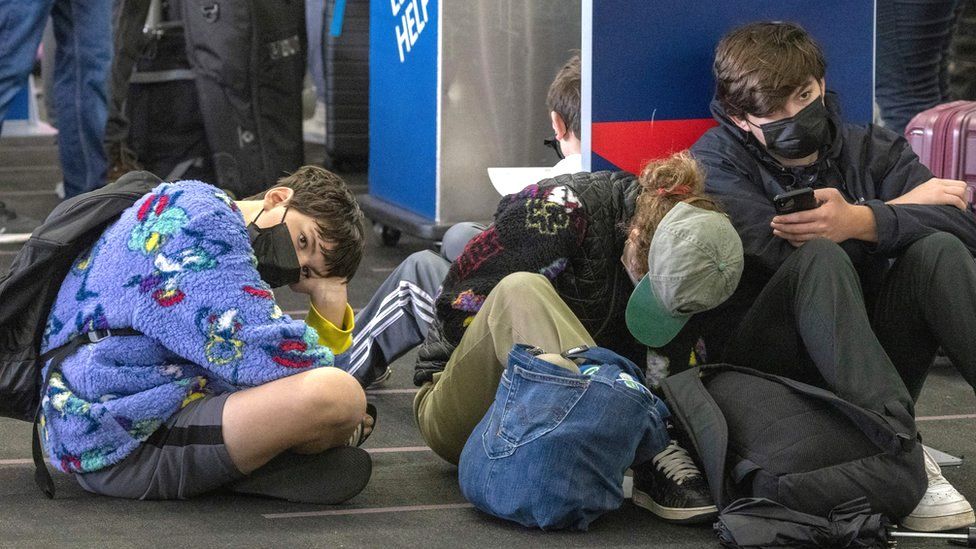 Holiday travel plans around the world continue to be disrupted with thousands of flights cancelled for the Christmas weekend as Covid infections surge.

Airlines have blamed shortages of healthy staff for the cancellations of nearly 2,400 flights on Friday and more than 2,300 on Saturday.

More than 800 of those cancelled on Saturday were to or from US airports.

In Europe, travel restrictions are among measures aimed at reducing cases, largely driven by the Omicron variant.

Despite early findings that Omicron is milder than other variants, scientists are concerned by the sheer number of infections being recorded.

Many of the flight cancellations are the result of airline crews testing positive, or being forced to self-isolate to stem the spread.

Further delays and disruption is expected with hundreds more flights cancelled on Sunday, according to website FlightAware.

The US, like many countries around the world, has seen a sharp rise in cases.

"When we have millions and millions and millions of people, all sick, all together at one time, it doesn't take a large percentage of those people to topple over the hospitals," Dr Hallie Prescott, associate professor of internal medicine at the University of Michigan, told the New York Times.

In the UK - which once again saw record-breaking case numbers confirmed on Friday - volunteers are preparing for a Christmas Day booster jabs push to reduce the impact of Omicron.

Across Europe, governments are bringing in their own measures to combat the increase:

But in South Africa - where the Omicron variant was first identified - the government has ended Covid contact tracing, except for serious cluster outbreaks or prisons.

The health department announced that as most of the population had now been exposed to the coronavirus, the policy is now shifting from a containment strategy to one of mitigation including self-monitoring, mask wearing and social distancing.

The US earlier announced it would lift travel restrictions imposed on South Africa and seven other African countries because of concerns about the Omicron variant on 31 December.

America's top infectious disease expert, Dr Anthony Fauci, warned earlier this week that Christmas travel would increase the spread of the variant even among the fully vaccinated.

However, thousands found their plans thrown into disarray as flights across the country were cancelled or delayed.

The worst affected US companies are Delta, United Airlines and American Airlines.

United Airlines said rising numbers of Omicron cases had "had a direct impact on our flight crews and the people who run our operation", adding that it was contacting impacted passengers in advance of them coming to the airport.

Overall, global airlines have cancelled more 4,700 flights scheduled to take off on Friday and Saturday.

In Australia, thousands of festive journeys were affected on Friday with more than 100 domestic flights from Sydney and Melbourne to other cities cancelled.

A spokesperson for the Australian airline Jetstar, which accounted for many of the cancellations, said the company had rebooked "the vast majority" of affected passengers "within a few hours of their original departure time so they can get to their destination in time for Christmas".

Meanwhile, Britons stranded in Australia have been making the most of the situation by spending time on Sydney's Bondi Beach.

"There's no flights home. I'm celebrating in the best way I can. I love being in Australia, I love being in Bondi," Matthew Ryan Johnson said, adding: "Being on the beach for Christmas day is a dream come true."

More than 5.3 million people have died with coronavirus worldwide, according to America's Johns Hopkins University. There have been 279 million confirmed cases.