Reducing road accidents: testing for alcohol must be enforced 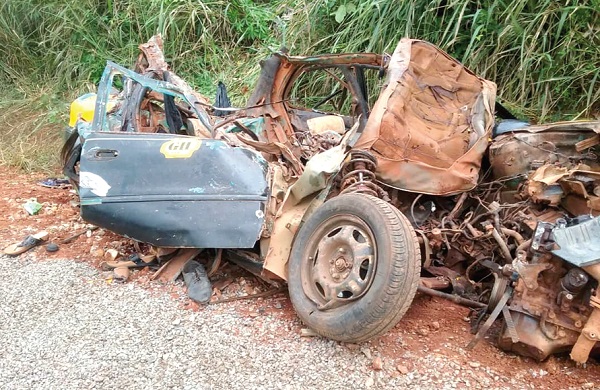 A mangled car after a crash
30.5k Shares

Road traffic accidents are a major health problem globally. Statistics from the World Health Organisation(WHO) in June 2022 indicate that approximately 1.3 million people die each year as a result of road traffic crashes. About 93 per cent of the fatalities on the roads occur in low and middle-income countries and at the same time, road traffic crashes cost most countries three per cent of their Gross Domestic Product (GDP).

Ghana is not left out of the doldrums of road traffic accidents. The country is touted to be among the African countries grappling with road traffic crashes. As shown by the US Centres for Disease Control and Prevention, fatal road injury is one of the top 10 causes of death in Ghana. It has been estimated by the Building and Road Research Institute of the Council for Scientific and Industrial Research of Ghana (BRRI) that the nation recorded 302,712 crashes involving 477,609 vehicles between 1991 and 2020.

In 2016, the World Bank reported that Ghana lost 8.2 per cent of its GDP to road traffic crashes. A recent data from the National Road Safety posits that road crash incidents during the first five months of 2022 in Ghana reduced by 4.67 per cent. In spite of the good news, it should be mentioned that about 1,140 persons died during the same period in 2022.

Several factors account for road crash accidents but one of the leading causes in Ghana is drunk-driving or driving under the influence of alcohol. However, studies have shown that accidents and deaths occurring from drunk driving depends on the content of alcohol in a driver’s blood which is generally referred to as Blood Alcohol Concentration (BAC).

BAC is the measurement of the level of alcohol in the blood and is most commonly used to assess the degree of alcohol intoxication. BAC is expressed as the weight of ethanol, in grams, in 100 millilitres of blood, or 210 litres of breath. BAC can be measured by breath, blood or urine tests. The effects are often observed when it comes to the judgement of moving objects and the processing of different information at the same time. It can affect other parameters for a long time including simple reaction time, vigilance, visual searchers and logical reasoning.

Why BAC Enforcement is Critical

Research has shown that the risk of a fatal accident occurring under the influence of alcohol increases significantly at 0.050mg/ml and above. At this level, all drivers are said to be impaired regarding driving performance. As such most countries across the globe have revised their BAC limit from 0.08 per cent to 0.050 per cent due to the little increase in crash risk at 0.05 BAC limit.

Consequently, the risk of a fatal car accident increases exponentially with a driver's BAC as a result of the diminished capacity of drivers while intoxicated to operate motor vehicles and the increased propensity for risk-taking behaviour.

Intoxicated drivers are significantly more likely to speed, to be improperly seat-belted and to drive the striking vehicle. The greater the BAC, the greater the average speed of the driver and the greater the severity of the accident.

The effect of alcohol on human skills has been reported even at the lowest measurable level suggesting that thereafter increasing in an approximately exponential manner. It has been proven that alcohol intoxication affects drivers’ ability to operate a vehicle at a BAC level of 0.035 per cent, it decreases operating accuracy at 0.06 per cent and impairs behaviour such as steering and braking with the range of 0.05 per cent and 0.10 per cent. In other words, there is unequivocal evidence that alcohol significantly impairs driving performance, as demonstrated through laboratory, simulator and driving studies.

What needs to be done

Available data on the current level of alcohol-impaired driving or riding road crashes is very high in the country given that Ghana’s BAC limit is high by international standards. Accordingly, studies recommend that to reduce drink-driving-related traffic crashes and fatalities in Ghana, there should be a reduction in the current national BAC limit.

Damsere-Derry et al. (2014) recommends that “In order to reduce drink-driving prevalence and its attendant road traffic crashes, it is recommended that the country should scale up its randomised roadside breath-testing programme; define standard drink quantities and disseminate this information to the populace through intensive media education; increase the minimum legal drinking age to 21 years; and reduce the legal BAC limit for youth to 0.05 per cent, from the current legal limit of 0.08 per cent.

The prevailing legal BAC of 0.08 per cent is on the high side; due to the apparent impairment at the 0.08 per cent level, the country should consider reducing this level over the long term”

It should be emphasised, however, that efforts are being made to reduce the menace of drunk-driving in the country. As part of government measure to reduce road crashes occasioned by drunk behaviour or BAC, the Ministry of Transport (MOT) has initiated a process of reviewing the limit downwards and this measure is supported by the scientific evidence and for this reason, we at CUTS International, a research organisation, endorse the initiatives by the government.

The Writer is with CUTS International, Accra.
E-mail: This email address is being protected from spambots. You need JavaScript enabled to view it.