Sail on, Captain, Sail on! Tribute by Gabby Asare Otchere-Darko 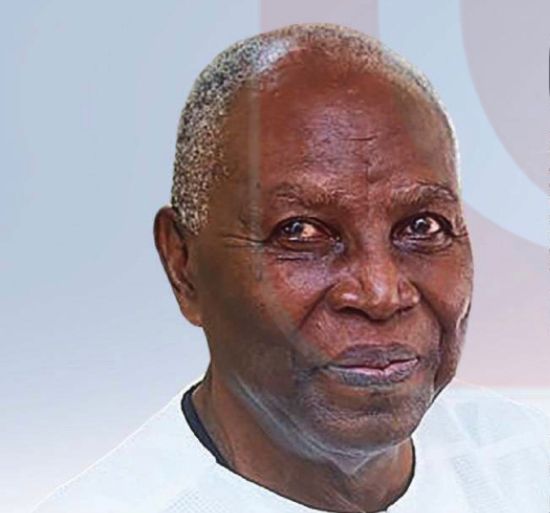 It was the last time Afrakoma Otchere-Darko saw her grandpa. Even more poignantly, as we were soon to find out, those were the last words ever spoken by Captain Archibold Nana Kow Attobrah Walker-Arthur
30.5k Shares

“We’re built to cruise for but a while upon this trackless sea, until one day we sail away into infinity.” - The Ship of Life, by John T. Baker

It was the last time Afrakoma Otchere-Darko saw her grandpa. Even more poignantly, as we were soon to find out, those were the last words ever spoken by Captain Archibold Nana Kow Attobrah Walker-Arthur. This was in the evening of Thursday, 27th October. He died in the afternoon of Sunday, 30th October.

That Saturday, 29th October, I went back there to visit him. He could not speak; not even utter inaudible words. Yet, he was conscious. Conscious of his searing pain. Conscious of the constant discomfort of the NG tube. Conscious enough for his eyes to be begging: “I’m tired! Too tired!” Conscious, also, of the ending dribbles of his sandglass.

Emptying faster than the drip keeping him nourished, but against his will, yet to be done. Conscious of those of us around him that moment in time. His wife, Rosalind. His daughter, Nana Adjoa. His daughter Egyirba’s in-laws, Dr Johnson Addo and Mrs Diana Addo, his physician, Dr Jonathan Yebuah, and Lawrence Savage, his distant nephew in Tema, who for years had become more like the dependable son and trusted friend always close by; to share a whisky, some grilled seafood, a joke or two from the old sailor.

The terminality of Captain’s illness, at least, had afforded him the pricelessness of time to say his goodbyes to those he loved in his last couple of months, bedridden. And, those loved ones who could, made the time to travel from near and afar to share a portion of his last precious moments with him. Privileged was I to be one.

On that last Saturday, I video-called Afrakoma’s younger sister, Nana Doquea, to speak to her grandfather, in what we all understood could be their last. I served as his voice in the conversation between him and his granddaughter. I would say something to her, on his behalf, he would signal his approval and Nana Doquea would respond. His last words to the 16-year-old were in essence: stay focused, study hard, maintain the right attitude, follow your passion, work hard, have fun and remember “I love you, too.”

‘Captain’ was how I always addressed my father-in-law. He was the best of storytellers. He had a mental library loaded with stories stuffed with delightful scenes of humour. Stories that were obvious that his wife of four decades, Rosalind, had heard many times before. But she will always sincerely and loyally find them funny, too. She would even sometimes fill in the gaps, like a character’s name, CAPTAIN ARCHIBOLD WALKER-ARTHUR (1940 - 2022) 45 a punchline.

Indeed, a week before he died, he saw the joke to be on both of them. He had to be rushed to the UGMC for a few days. After standing by Captain’s hospital bed for a long time without hydration, Mrs Walker-Arthur started to faint. Thankfully, Lawrence was on hand to hold her up. The old captain looked directly at his falling wife and said, calmly: “Now, we are both feeling the heat!”

His last memorable story I heard was two months before his final crossing of the brow. He was on his sick bed at home, in the presence of my wife and mother-in-law. He recalled an event that happened in or about 1972. Those were the days when bad boy gangs were running riot in the twin-city of Sekondi-Takoradi.

Anthony Kofi Forson, a young and active lawyer and his wife, Marian Forson, had moved to Takoradi. Mrs Forson, worried about her husband’s nocturnal activities and suspicious there was a side chic out there, went to Cape Coast to complain to her father-in-law Napoleon Forson and de facto mother-in-law, Maa Afoah. She requested the intervention of Maa Afoah to get Anthony Forson to come home early.

The mother-in-law, visibly disturbed by this, dutifully obliged and visited the young couple in Takoradi the following weekend to give the young lawyer a proper earful. But, not exactly what Marian expected. Maa Afoah said to her boy: “This city is too dangerous to stay out late, Kofi. If you go out and it is late, stay there! Come home the next morning when it is safe.” A pretty practical advice from a caring mother.

I relayed this story to a son of the Forsons, my learned friend, Tony Forson. And, gave him judicial notice that it could, just perhaps, form part of my tribute. Eleven days from today, 21st December 2022, will mark the twentieth anniversary of my marriage to Nana Adjoa. Two of the reasons our union has endured and grown stronger are her parents. Always supportive; slow to take sides, ever ready to encourage and forever eager to protect.

Indeed, a week after Captain’s death, Mrs Rosalind Walker-Arthur disclosed to me that shortly after we fixed the date for my marriage to their daughter, they soon found out it would clash with another marriage of a family member. Captain’s response was classic: “We shall still go ahead. Let’s not attempt to change the date or tempt fate. You never know with men!” Beyond the strong love that the two of us (Nana Adjoa and I) shared, Captain was partly responsible for my marriage, and largely so with the timing.

I had met Nana Adjoa in October 2001, when I finally moved permanently from England to Ghana, and had moved from being a weekly columnist for the Statesman newspaper to being its Editor, replacing the veteran Sports journalist, Ken Bediako.

The Statesman was owned by Nana Akufo-Addo, Ghana’s Attorney General at the time, who revived it a decade earlier. His father, Edward Akufo-Addo, first established the paper in 1949. I had made the transition from journalism to law in the UK, working with Gulbenkian, Harris & Andonian, (now merged with Isadore Goldman), specialising in insolvency, conveyancing, immigration, business law and trust law. In Ghana, I enrolled at the Ghana School of Law, but never had the discipline to attend classes. Luckily, I met a first-class student, Nana Adjoa. I first fell in love with her encephalon; then her beauty and character.

She volunteered to be my private tutor, free of charge. One day, around the beginning of our transition from mere tutorials to tutorials with benefits, Nana Adjoa invited me home to Tema. The warmth with which her parents received me made a strong, persuasive impact on our eventual marriage. She would spend some nights at my place in East Legon. This, of course, did not go down well with the old sailor.

By June 2002, he invited me for a conversation over the impropriety of my illegal connection to his daughter’s grid. He thought I should do the proper thing. I quickly and happily CAPTAIN ARCHIBOLD WALKER-ARTHUR (1940 - 2022) 46 obliged. First, was the knocking ¬– per Akan custom, the engagement ceremony which grants a couple the temporary licence towards marriage. Shortly after, in the same year, with his full blessing, we got married. NDC were on the same day, having their special delegates’ congress at the Trade Fair site to nominate Prof John Evans Atta Mills (with 1,116 votes) as against Dr Kwesi Botchwey (194), as their flagbearer for 2004.

My colleagues in the media, including Gina Blay, Kweku Baako Jr, Kwesi Pratt Jr, Kwami Sefa kayi, Egbert Faibille Jr, all accompanied me to Captain’s house at Tema Community 10 for that simple but decent ceremony on 21st December, 2002. I am glad that, with the encouragement and approval of her parents, especially Captain, I did not waste time in marrying their daughter. And for the past twenty years, Nana Adjoa has been a major factor to the person I have become today – the positive parts of me, I mean! She adds priceless value in many, many ways to our union, with love and guidance.

Thank you, Captain, for encouraging me to do the right thing. In Captain and his wife, ‘Odasani’, I have been lucky to have the best in-laws for which any spouse can ask. They are there when you need them. They will not interfere when you do not need them. Forever supportive. Forever decent. Forever real. Captain and I got on very well. It was also helped by the fact that, unlike his senior brother Dr Don Arthur, Captain was a strong NPP loyalist. A card-bearing member.

An avid listener of all news current. His attitude was to be philosophical and positive even when things go wrong, like losing an election. His, was not to complain about the wind. Nor, was waiting for the wind to change his lot. His, like a good sailor, was to adjust the sails with the wind and sail on. I admired Captain for three main things: he loved my wife, unconditionally. He loved my children the same way and he loved me, too.

Even though he was not the biological father of my wife, Nana Adjoa, the only give away was but a mere nomenclature. He, a Walker-Arthur and she, a Hackman. Captain had been the father around her since childhood; who never made her feel differently from her two younger sisters, Egyirba and Mofuah, his own biological kids from Rosalind, aka ‘Odasani’. Among the several nicknames Captain gave his wife, my favourite was Odasani, so I took the liberty to call her same. Such was the admiration I had for Captain that when in April 2015, Nana Adjoa and I decided to have our third and final child, after a nine-year gap, I chose to name our son, Nana Kow Attobrah, after my wife’s stepfather.

I remember my senior cousin, Nana Akufo-Addo, asking me at the time, what name I had settled on for my son. When I mentioned a Fante name, he looked perplexed and asked why, for an Akyem man with an Ashanti dad. I explained I chose to name my son after my wife’s stepdad because “he has been there; he has always been there for us; for the children.” Indeed, Captain was always there, not in your face, but there, when you needed him. Assuringly there. A solid anchor.

The ablest navigator, if called upon, whenever, for wherever. When in August 1990, ECOWAS took the unprecendented step of sending a peacekeeping force into Monrovia by setting up what has become a model of regional conflict resolution, ECOMOG, one of the pioneering heroes was Captain Archibold Walker-Arthur. CAPTAIN ARCHIBOLD WALKER-ARTHUR (1940 - 2022) 47 Like Captain Charles Fryatt, the Master of the SS Brussels – a passenger ferry that evacuated refugees during World War One and managed to escape enemy fire from the Germans in 1916, Captain Walker-Arthur was the merchant ship captain who ferried troops amid gunfire, to the Liberian war front, and brought refugees to safe havens from war-torn Moronvia. Unlike Captain Fryatt, Captain Walker-Arthur survived to be today honoured, albeit posthumously, by the Ghana Armed Forces as a civilian war hero.

I had travelled to Guyana for a week in late September, 2022. When I returned to visit him at home, Captain had deteriorated so much that my eyes were soaked with grief as I stood by his bed. He kept looking at me, with rather comforting eyes. Saying but silently to me, “Don’t worry. It shall be well.

It is well…” He was drifting offshore, peacefully, as the clock ticked by. Sailing away from life’s harbour; catching the stormless breaths of gentle winds in his sails, to the oceans beyond, still exploring, dreaming, discovering… Gone but only from our sight. From our farewell cries. Sail on, Captain! Sail on… Sail on…

This tribute is by Gabby Asare Otchere-Darko, son-in-Law of the late Captain Archibold Walker-Arthur