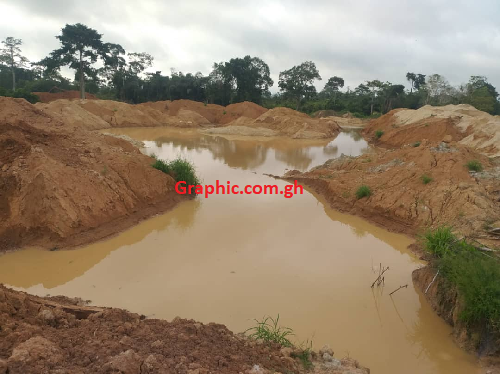 Initially, I made up my mind not to write this piece because I thought it will only amount to flogging a dead horse. But upon second thought, I found wisdom in the second voice - the voice of our elders, which advised that if the mad devil pursuing you has not stopped, there is no point giving up.

This is how I got the motivation to tell the worrying story about the massive destruction of the environment by galamsey operators at Tugakrom, a farming community near Dadieso in the Suaman District in the Western-North Region.

I went to that mining community last Tuesday, June 9 with the Minister of Lands and Natural Resources, Mr Kwaku Asomah-Cheremeh and a military detachment for an operation. The team had picked up intelligence that there was a resurgence of galamsey activities in that part of the country. 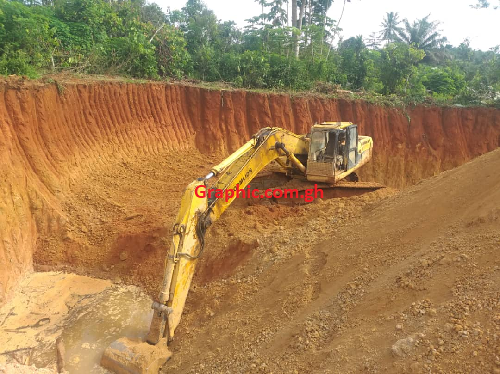 An abandoned excavator at Tugakrom after the illegal miners fled to avoid being arrested.

When we got there at about 7a.m, the ugly sight that greeted us was nerve-wrecking. Scores of illegal miners who were busy destroying the environment in search of gold, took to their heels and meandered their way through deep gullies into the “jungle.”

About 100 acres of the forest cover had been reduced to heaps of impotent red soil that cried for mercy. Beneath those mountains of excavated soil were excavators and other equipment that the illegal miners abandoned as they ran for their lives. The galamsey operators had also wiped off hundreds of cocoa trees and inflicted wounds on many others.

The Bia River, which was sandwiched between two of the illegal mining sites, had been reduced to a muddy pool containing a milky-brown liquid substance that did not qualify as water. The course of the river, which served as the main source of water for the Suaman District, had been blocked by the activities of the illegal miners.

Although the Minerals and Mining Act, 2006 (Act 703) debars foreigners from participating in the Small-Scale Mining (SSM) sector, Chinese have largely taken over the sector; of course with local collaborators who aid them to flout the law.

One of the structures at Tugakrom where the illegal miners live

Some of the residents of Tugakrom blamed the resurgence of galamsey in the area on the powerful local people who collaborate with Chinese to destroy their environment. They were worried that anytime excavators were seized from Chinese, the local authorities gave the equipment back to them to continue with their illegal activities.

This claim was corroborated by Mr Asomah-Cheremeh when he accused the District Chief Executive (DCE) of Suaman, Christian Baah of being complicit in the illegality.

“During the teething days of COVID-19, I came to this area with 32 military men and some national security operatives and found nine excavators. We placed the equipment in the hands of the DCE and the district police commander; but when we came back later to convey the machines, the police were by the machines holding their AK47 and the essential parts of the machines had been removed.  We had intelligence that these same illegal miners have come back to site and they are using the same machines for their operation.”

“My worry is that "do we have a DCE here?; Why is he not working with the district police command to arrest these illegal miners? Are they working in the interest of the state and government?” These are multiple questions that must be answered,” he stressed.

Meanwhile, Mr Baah also pointed accusing fingers at one Charles Addo, who is the Aide to Mr Asomah-Cheremeh and more of the eye and ears of the minister as far as tracking the activities of illegal miners is concerned.

An abandoned excavator at Tugakrom after the illegal miners fled to avoid being arrested.

Mr Addo has been at the centre of the operations that led to the seizure of excavators and some arrests in some mining communities. However, the Suaman DCE claimed that there was more to Mr Addo than meets the eye.

"Charles Addo came here to do illegal mining in 2018 but I did not allow him. I seized his machines because he had no documents to show that he was there to do legitimate mining. There were calls from Accra that I should release the machine to him. Is it not interesting that Charles Addo is the one who is now leading the operations against galamsey at the same place?,” he quizzed.

To get a clearer picture, I contacted Mr Charles Addo who laughed off the accusation by the DCE.

“Somewhere in 2018, I received a call from some party members that the Suaman DCE seized their excavator so I should help them to retrieve it. I called Mr Charles Bissue, the Secretary to the Inter-ministerial Committee on Illegal Mining (IMCIM) and he asked the DCE to release the machines. I do not have mining equipment  and I don’t even know how to mine,” he said

Mr Addo added that from his work on the ground, he could confidently say that the galamsey menace thrived because DCEs and influential persons in the communities were behind it.

As the accusations and counter accusations persists, the illegal miners are having a field day. The resurgence of galamsey in the Western North Region is just a tip of the iceberg as there are many other cases of the illegal activity in other parts of the country. The devastation caused to the Oda River Forest Reserve in the Amansie Central District in the Ashanti Region remains fresh in the minds of everyone.

A section of the 100-hectares of land that have been destroyed by galamsey operators.

Just in May this year, the Chief Executive Officer (CEO) of the Ghana Cocoa Board (COCOBOD), Mr Joseph Boahen Aidoo, expressed concern over the wanton destruction of cocoa farms by galamsey operators at Osino in the Fanteakwa South District in the Eastern Region.

During a tour of cocoa farms in the region, Mr Aidoo experienced the destruction first-hand and appealed to security agencies to help in clamping down on the illegal mining activities.

It is worrying that stakeholders who are supposed to join forces to clamp down on the activities of galamsey operators seem to have divided fronts.
The puzzle on some missing galamsey excavators that were under the care of IMCIM is yet to be solved while the so-called “powerful people” behind the menace are yet to be fished out.

The imagination that equipment as big as an excavator can be moved to a forest and be operated there for days and months without anyone knowing about it gives the impression that we may be having a wild goose chase in the galamsey fight.

What is even more worrying is that when two elephants fight, it is the grass that suffers.

No wonder, farmers have lost their farm lands: residents of mining communities have lost their sources of water; education in those areas has been affected; child labour is rife and teenage pregnancy has become synonymous with the residents.

How long can we continue to play the ostrich in the fight against illegal mining in this country!! Do we care about the negative impact of this menace on the country? Posterity will be the judge.