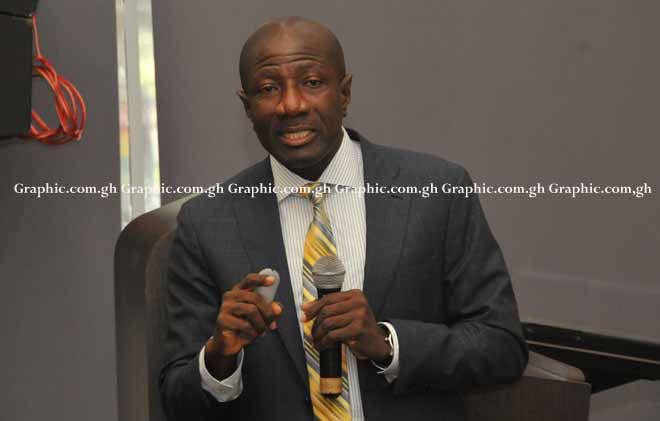 MTN Ghana plans to spend an amount of $143 million in capital expenditure in 2017 in a bid to boost a raft of network expansion programmes aimed at delivering communication speed and improved network access.

This year, the communications giant will roll out 197 4G [Long Term Evolution - LTE] site across the country in addition to the existing 275 already spread nationwide. This will mean a total of 475 LTEs in all.

Chief Executive Officer of MTN Ghana, Mr Ebenezer Twum Asante said at the MTN stakeholders’ forum in Accra that the telecommunications company will roll out 561 new 3G sites across the country whilst adding 345 2G new sites to the existing one.

These expansion programmes are expected to increase network capacity and improve on data provision and network security. This, Mr Asante said will provide an attractive value proposition for the MTN brand.

The company’s financial results show that the company delivered an attractive value propositions that saw revenue grow 19.8 per cent supported by data, outgoing voice and digital.

Data revenue up 65.7 per cent contributing 42 per cent to total revenue, driven by expansion of network coverage, increased availability of low-cost smartphones and LTE network as well as uptake in data usage supported by lifestyle bundles and new data bundles introduced with the launch of 4G.

Sale of smartphones by MTN increased by 64.4 per cent to 5.3 million while digital revenue contributed 48 per cent to data revenue, supported by mobile financial services.

Mobile Money active subscribers also increased by 79.4 per cent to 5.7 million, which was supported by strong regional innovation and marketing.

Taxes and other payments

In 2016, MTN Ghana paid a total of GH¢1.1 billion to the government and other regulatory agencies. The company paid GH¢718 million in taxes to the Ghana Revenues Authority (GRA) and GH¢51.8 million to NCA and GIFEC as dues and an additional GH¢258 for the 4G LTE. GH¢85 million was also incurred for SIIT.

Mr Asante’s beautiful presentation of the company’s performance was almost dimed by the enumeration of a litany of obstacles to growth.

He mentioned fibre cuts, load shedding and unpredictable costs as some of the heavy obstacles that may hinder the growth of the blue chip company.

There is also the issue of protracted permitting, price competition, uncertainty with business operating permits and escalating costs is also an albatross around the company’s neck.

But the biggest obstacle that eats into the company’s finances is the National Fiscal Stabilisation levy, which, Mr Asante said is having a toll on their business.

Businesses in the country have heightened their call for the withdrawal of the Fiscal Stabilisation Levy (FSL), which they say was having a toll on their businesses.

“Abolishing the FSL, which is deducted before profit is declared, will go a long way to make the telecom industry robust to continue its positive contributions to the economy of Ghana”, he said.

The MTN CEO said although the levy was introduced with sunset clauses, it had continued and it was time it was abolished.