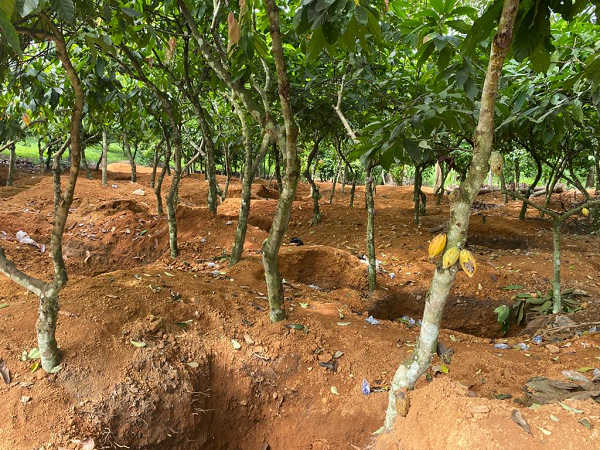 COCOA farmlands and their surrounding areas across the country will no longer be available for lease to companies and individuals prospecting for gold and other minerals, the Ghana Cocoa Board (COCOBOD) and the Minerals Commission (MinCom) have warned.

The two bodies further indicated that people who mined in those ‘blocked areas’ illegally would also be prosecuted for causing destruction to the cocoa farms which the State had invested in through the provision of free seedlings, agronomy services and subsidised fertilisers among other inputs.

Consequently, COCOBOD and MinCom have agreed to share data on the location of cocoa farmlands across the country for the commission to superimpose on its data and block those areas from being made available for the purposes of mining.

These were some of the outcomes of the resolutions reached by COCOBOD and MinCom on April 22 after a joint board meeting in Accra.

Already, COCOBOD has said more than 19,000 hectares (Ha) of cocoa farmlands have been affected by illegal mining, also called ‘galamsey’.

The meeting was, therefore, for the two state agencies to find lasting solutions to the scourge of illegal mining on cocoa production nationwide.

The illegal miners excavate and dig cocoa farms in search of water, use mercury and other chemicals dangerous to cocoa plant growth closer to the farms, as well as pollute water bodies used by the farmers to irrigate the farms.

Mrs Oteng-Gyasi told the Graphic Business on April 24 that the commission expected the new measure to take effect from this week after the COCOBOD had presented it with the location data.

“For us the regulator, it is not everywhere that we find minerals that we have to mine. The minerals and the environment are for generations unborn and so we need to be responsible in how we exploit them,” Mrs Oteng-Gyasi, who is a former Minister of Lands and Natural Resources, said.

She said understanding informed the decision by MinCom, which regulated the mining sector, to agree with COCOBOD that “if you find a mineral in a cocoa farm or closer to it, you cannot mine because that mining, especially if it is the surface mining, will destroy the farm and the industry that cocoa sustains”.

“We also agreed that there is the need to share information on where cocoa farms are located between the two organisations such that when MinCom are issuing licences, they will know that such areas are exempted from mining,” she noted.

Mrs Oteng-Gyasi described the impact of galamsey on cocoa production as threatening and pledged to support the board to address the challenge.

In that regard, the former minister of Tourism, Culture and Creative Arts said the commission had agreed to intensify its Community Mining Scheme (CMS) aimed at formalising illegal miners into the mining system.

She said the commission had developed a manual on responsible mining, intensified education on the need to operate formally and partnered other state agencies to provide alternative livelihoods for youth in mining communities.

She stated that the commission had also partnered the Geological Survey Authority to map out areas that were rich in minerals for allocation to persons who registered on the CMS.

That, she said, would help pervert the haphazard surface excavation by small-scale miners in search of gold and other precious minerals.

COCOBOD has already disclosed that more than 19,000 hectares (Ha) of cocoa farms have either been destroyed or affected by galamsey activities, leading to loss of income to farmers and investments by the board and the country at large.

In a presentation made to the board of directors of COCOBOD and MinCom at the joint meeting, the Chief Executive Officer of COCOBOD, Mr Joseph Boahen Aidoo, said in the Eastern and Western regions, more than 81 and 74 per cent respectively of cocoa farmlands had been affected by illegal mining.

In the Ashanti Region, he said more than 68 per cent of cocoa farm areas were affected by the haphazard digging and unregulated use of mercury and other chemicals to extract gold and other precious minerals.

Of grave concern, he said, was the extension of the canker to cocoa farms that were recently rehabilitated by the board to augment national production and boost farmers’ incomes.

The CEO said another 79.41 Ha or two per cent of the recently rehabilitated farms had either been affected by the menace or at risk of being affected.

He noted that those threatened the sustainability of the cocoa sector, which generated an average of $2.5 billion in foreign exchange every year, as well as its associated multi-billion cedi cocoa processing sub-sector and more than 800,000 jobs.