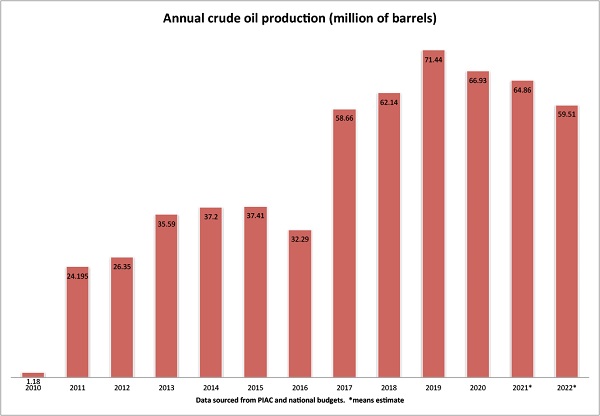 The heavy contraction of the oil and gas sector last year has compelled the government to impress on oil production and exploration (E&P) companies to quickly resolve the challenges facing their operations to enable them to ramp up production.

Particularly at a time when oil producing countries across the globe are cashing in on the sharp rise in the price of the black gold, it said increased production was needed to profit from the phenomenon.

Data from the Ghana Statistical Service (GSS) showed that the oil and gas sub-sector contracted by as much as 12.5 per cent last year, partly dragging growth in the industry sector to the negative 0.8 per cent.

Against this background, the government was of the firm belief that increased production would also help to lift up growth in the oil and gas sub-sector for the industry sector of the economy to rebound from the consistent contraction.

The Minister of Information, Kojo Oppong Nkrumah, told the Graphic Business in an interview on April 21 that with crude oil price still selling above $100 per barrel, it was uneconomical for the country’s petroleum productions to be declining and called for increased efforts to ramp up production.

The minister was speaking to the paper on how to bolster growth in the oil economy to help anchor growth and quicken the economic recovery.

It came at a time when crude oil production is set to fall to a six-year low of 59.51 million barrels in 2022.

Mr Nkrumah, who is the Member of Parliament for Ofoase Ayirebi in the Eastern Region, said the government was aware that the challenges facing the producers were not those that could be resolved in the short-term.

That notwithstanding, he said it behoved on them to speed up their resolutions.

“The room to profit from higher commodity prices is limited by the capacity of operators to churn out volumes in substantial quantities. The capacity is not a short-term fix. It requires about six months investment and the reorientation of their systems and that is what we are working on.

What the government, through the ministries, is doing to admonish the oil companies is that they need to quicken up the resolution of the things that affect volumes,” the Information Minister said.

He mentioned the turret bearing challenges with floating, production, storage and offloading (FPSO) Kwame Nkrumah at the Jubilee Fields and the legal tussle between Springfield and ENI over the unitisation of the Afina oil block and the Sankofa Field.

Although the two blocks straddle, the Afina block is held by Springfield E&P while the Sankofa Field is owned and operated by ENI and Vitol.

“These are some of the challenges and we are aware of them, but at this stage, we think there is less we can do except to ask that they speed up with whatever solutions they have found,” he said.

The discussion with the minister came at a time when the oil and gas sub-sector has been found to be dragging down growth on the back of declining crude production.

Data released by the Ghana Statistical Service (GSS) on April 19 showed that annual growth rebounded to 5.4 per cent last year from a revised growth rate of 0.5 per cent in 2020.

The provisional growth rate for 2021 is above the government’s target of five per cent that was later revised down to 4.4 per cent as well as estimated by the World Bank and the International Monetary Fund (IMF).

The GSS data showed that the strong growth was largely driven by stronger growths in the agricultural and services sectors.

The industry sector, however, contracted by 0.8 per cent on account of a 12.1 per cent contraction in the mining and quarrying sub-sector, of which oil and gas is a key component.

The data further showed that the oil and gas sub-sector also contracted 12.5 per cent last year, partly dragging growth in the industry sector to negative 0.8 per cent.

The Information Minister said the government was concerned about the development and had been working with the producers to reverse it.

“Generally, there is limited capacity to increase production and that is resulting in the contraction we are seeing in the oil and gas sector. It is something the government is worried about and what we have been doing is to tell the producers to speed up the resolution of the challenges holding down production so that we can produce more to profit from the current price hikes,” Mr Nkrumah said.

After suffering a maiden annual decline in 2016, oil production was on the rise until 2020 when the COVID-19 pandemic deepened earlier challenges in the sector to slowdown production.

Although 2021 production numbers are not available yet, the government had estimated that output would fall further to 64.86 million barrels last year.

The 2022 Budget Statement now estimates that production would hit a six-year low of 59.51 million barrels this year.

Ironically, while the country failed to raise production numbers over the past three years, prices of the ‘black gold’ recovered from their deepest falls to their highest heights in eight years.

The oil price surge led to big consumer nations calling for increased pumping of crude from the world’s leading producers.

From around $25 per barrel in April 2020, the price rose sharply to a record-high of $120 per barrel in March this year, before retreating to below the $110 per barrel mark in the second week of March.