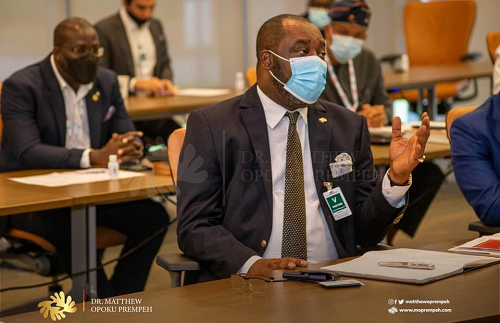 The Minister for Energy, Dr Matthew Opoku Prempeh, has called on oil-producing countries in West Africa to continue engaging each other so as to help share best practices in order to help derive maximum benefit from the oil and gas resources they are endowed with.

He said when oil producing West African countries start engaging each other, in terms of sharing best practices, it would go a long way to enable the member countries to learn valuable lessons from each other.

Dr Prempeh made the remarks at the ongoing Offshore Technology Conference (OTC 2021) in Houston, US. It was on the theme: “West Africa: Sharing Prosperity in Oil and Gas resources.”

He expressed the worry that in spite of the fact that nearly half of the West African countries are blessed oil and gas, they lacked the capacity to exploit them without having to rely on foreign companies.

“In Ghana, for instance, our first oil field – the Saltpond Field, was discovered by an American company, Signal-Amoco Consortium in the 1970s and several years later, two American Companies – Kosmos Energy, Anardarko and their partners discovered Ghana’s most prolific world class oil at Jubilee Field and subsequently the TEN Field in a separate contract areas,” he explained.

The same, he said, could be said of Nigeria, where Shell began drilling in 1956, leading to the country’s first discovery two years later.

For Dr Prempeh, cooperation would help West African countries to derive maximum benefit from the oil and gas resource.

He said several million barrels of oil and large volumes of gas are produced on a daily basis in West Africa and Africa as a whole, owing to its partnership with foreign companies such as Chevron, ExxonMobil, and Hess.

He said it was therefore important to look at ways in which both sides – those who have the resource (oil and gas) and those with the finances and the technology to exploit them can engage in a win-win situation.

“That could derive mutual benefits from their collaboration in order to benefit the citizens of those countries and the shareholders of the oil companies. To do this, we must examine in turn how each side could benefit from our contractual arrangements,” Dr Prempeh said.

The unfortunate reality in several West African countries, particularly in the resource-rich areas, he said, remains the fact that the standard of living of the people is normally not commensurate with the wealth of resources being extracted, leading to social and political agitation in several instances.

“In most countries including Ghana, there are established programmes and plans to have exploration and production companies to give back to society through social investment programmes and direct employment of indigenes to improve on their economic conditions,” he noted.

Exploration and production companies in Ghana, Dr Prempeh said, are also expected to train and transfer knowledge to indigenes as well as offer significant contracts to local firms to render services pertaining to the petroleum operations.

This, he said, must be beyond peripheral areas such as security, transport, and catering and look at areas that are core to the oil and gas industry, saying “These are all mechanisms of empowering indigenes economically as the exploration and production companies grow in their operations and finances. These come under local content and localisation.”

In the area of skills training, he said, it was important for governments in the West African sub-region to make the necessary investments particularly in the youth to ensure that they possess the necessary skills to meet the demands of the highly specialised labour force that the oil companies require to ensure smooth operations.