Govt to tap into expertise of private sector 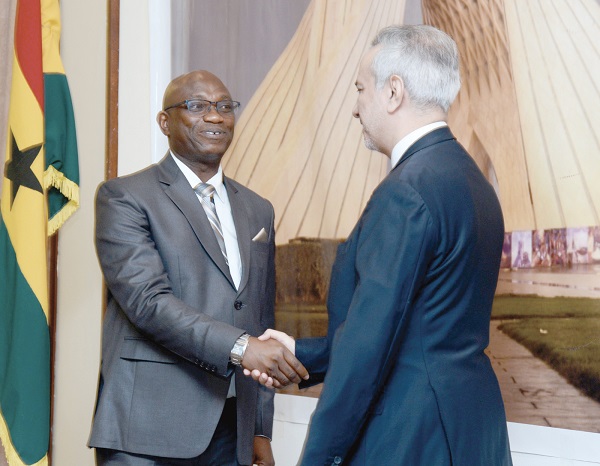 Mr Bright Wireko-Brobby (left), in a handshake with Dr Nosratollah Maleki during the celebration of the 41st Victory anniversary of the Islamic Revolution of Iran in Accra. Picture: Maxwell Ocloo Follow @Graphicgh

The government of Ghana is keen on tapping into the expertise and resources of the private sector to drive the industrialisation policy of the country, the Deputy Minister of Employment and Labour Relations, Mr Bright Wireko Brobby, has stated.

He said the necessary institutional framework, with attractive investment packages, had been created to enable the active participation of the private sector in national development.

He noted that the government had put in place flagship policies, which are aimed at revamping Ghana’s economy, strengthening the private sector as the engine of growth, to enable it to create jobs and transform the Ghanaian economy from an agrarian one to an industrialised economy.

“Some of the policies such as the “Free Senior High School”, One district, One factory”, “Planting for Food and Jobs”, as well as the “One village, One dam,” irrigation projects are beginning to impact positively on the lives of many Ghanaians “, he stated.

The deputy minister said in July 2019, Ghana won the bid to host the secretariat of the African Continental Free Trade Area (AfCFTA), possibly the most important institution of the African Union in the history of its existence.

“We would, therefore, like to call for the increased presence of Iranian manufacturing industries in Ghana to take advantage of the continental market that is to be created by the agreement”.

He said Ghana and Iran were both members of international organisations whose ideals were built on values such as the respect for the rule of law, peace and human dignity.

Within that framework, he said Ghana has, on a number of occasions, cooperated at the multilateral level with Iran in pursuit of finding solutions or providing solutions for global challenges.

The Iranian Ambassador to Ghana, Dr Nosratollah Maleki, noted that the 1979 uprising of the Iranian nation led to the overthrow of a tyrannical ruler over Iran and the Islamic Republic was established with 98 per cent in a popular vote cast by the Iranian people in a free referendum.

He said the Islamic Republic of Iran, after passing through many ups and downs, was able to gain valuable achievements in political, social, scientific and economic fields.

“Despite the unfair sanctions imposed on my country, with the resistance of its people, Iran stood on its feet economically, succeeded in science and technology and became a big player in the region,” he added.

Dr Maleki referred to Iran as a gateway to the central Asian countries.