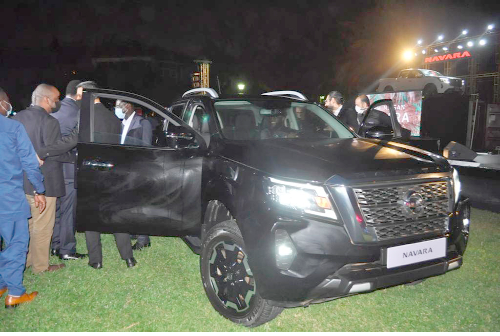 APAN Motors Trading Company Ltd (JMTC) has released an improved version of its Nissan Navara Pickup onto the market after halting its production in 2016.

The company launched the all-new Navara Pickup vehicle in October in Accra with an enhanced level of safety, comfort and driving pleasure to customers. It said the latest vehicle continued to bring durability, reliability and versatility that it was known for.

It was manufactured in South Africa, according to Japan Motors, the distributor of Nissan vehicles in the country.

The Managing Director of Japan Motors, Mr Salem Kalmoni, said the new Navara brought the best of what Nissan had to offer.

He said it was rugged and tough, smart and offered premium comfort but at a price that provided customers great value for money.

He recalled that the manufacturing of the Nissan Navara was halted in 2016 after Nissan introduced a new vehicle model that did not succeed because it was not tropicalized for Africa and did not meet the severest road conditions here.

The MD said the Nissan Navara would become part of the vehicles the company would locally assemble in Ghana.

“We are in the final phase of construction, tooling and training of our personnel and we hope to commission the assembly plant on schedule in the first quarter of next year," Mr Kalmoni said.

The General Manager of Nissan West Africa, Mr Imad Ghorayeb, said the company was investing heavily in Africa as part of the Nissan Next policy.

The Chief Executive Officer (CEO) of the Jospong Group of Companies, Mr Joseph Siaw Agyapong, who was the guest of honour, said Japan Motors and the Kalmoni family had, for a decade, built a successful business.

He said the establishment of the new Nissan Assembly plant was one of the most important investment by the group and expressed the hope that it would undoubtedly be one of the most technologically advanced and modern facility, not just in Ghana, but also in West Africa.