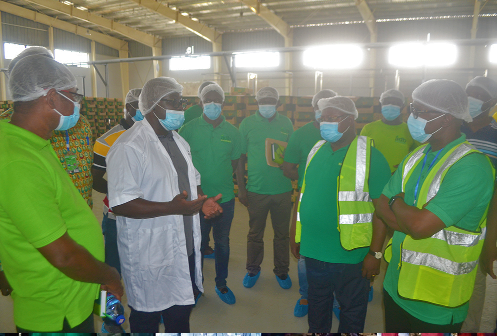 Mr Frederick K. Acquaah (2nd from left), Director of Operations of the Ekumfi Fruits Factory, explaining a point to Daasebre Agyapong II (right), Dr Kofi Mensah (2nd from right) and other officials during the visit

The Agricultural Development Bank (ADB) has provided a GH¢30 million funding facility to the Ekumfi Fruits and Juices Limited as part of its outgrower scheme to cultivate adequate pineapples to feed the factory, the Managing Director of the bank, Dr John Kofi Mensah, has disclosed.

According to him, the bank as part of its mandate to support the growth of agribusinesses had provided the funding support, which was the first phase, to enable the factory to have enough raw materials to feed the factory for all year round production.

He said “Some factories regularly imported concentrates and other raw materials for production leading to huge cost of production and that ADB as part of its outgrower and in-grower scheme will support the factory to have raw materials to produce its products to meet the demand of the market.

Dr Mensah disclosed the above in an interview with the media when he led the management and the board of the bank to visit the factory and its farms in order to acquaint themselves of its operations.

The Managing Director said: “One key importance of the outgrower scheme being spearheaded by the bank and its agribusiness division is that it will create thousands of jobs for the people in the areas where the scheme is being implemented”.

He stressed that ADB was committed to the provision of jobs to many people through the outgrower scheme, saying “As a bank, we will fully support factories that are agribusiness in nature to provide direct and indirect jobs to the youth”.

Dr Mensah said that the outgrower scheme, if sustained, would reduce the importation of raw materials, thereby reducing the spending of foreign currency to import raw materials to feed local industries.

Daasebre Agyapong II said the bank had identified the outgrower scheme as a reliable way of supporting industries with raw materials under the government’s one district, one factory (1D1F) initiative and to create jobs in local communities to curb rural-urban migration menace.

He noted that so far ADB had disbursed a total of GH¢101,602,503.24 to 17 companies under the 1D1F initiative in the areas of agro processing, aquaculture, poultry, construction and manufacturing.

The Director of Operations of the factory, Mr Frederick Kobbyna Acquaah, said that ADB’s funding support had come at the right time considering the factory’s acceptability and demand for its products in the country.

He said “The funding support from ADB to grow more pineapples will enable the company to step up production.