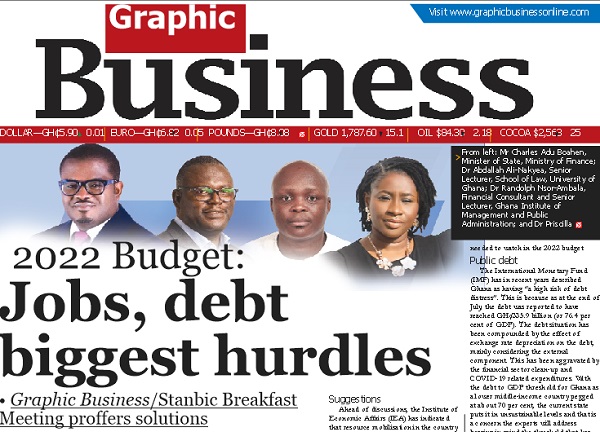 With the country’s public debt reaching unsustainable levels, unemployment becoming a major concern and internally generated revenue unable to match up with government’s huge expenditures among other issues, watchers of the economy will be waiting with bated breath as they look forward to the 2022 budget expected to be laid before Parliament on November 17.

Like any ordinary citizen, they will anticipate a budget capable of restoring hope and addressing their major challenges.

Other key issues, which many will expect pragmatic solutions to in the budget, will be how the government will tackle the gaping infrastructure challenges, particularly the worsening road networks and the lack of funding to expand the real sectors of the economy to create sustainable jobs for the people.

There are calls for the government to move away from focusing on growth using the extractive sectors which seldom employ people and focus on growth in the real sectors which have the potential to create more opportunities at the micro level.

The Graphic Business/Stanbic Bank Breakfast Meeting, the last quarterly meeting for the year, has today provided another unique platform for experts to share their views as far as their expectations of the 2022 budget is concerned.

It is on the theme: Pre-Budget 2022: Insights and recommendations.

A Minister of State at the Ministry of Finance, Mr Charles Adu-Boahen, who is the Keynote Speaker for today’s event, is joined by the Special Guest/panel member, a Lawyer and Tax Consultant, Dr Ali Nakyea. Other panel members are Financial Consultant and Lecturer at GIMPA, Dr Randolf Ambala and a Senior Lecturer, Department of Economics, University of Ghana, Legon, Dr Priscilla Twumasi Baffuor.

Ahead of discussions, the Institute of Economic Affairs (IEA) has indicated that resource mobilisation in the country is a major problem and wants to see some raft actions to address the challenge. That, it believes, can be done by setting ambitious revenue targets that are achievable.

It argued that Ghana’s personal income tax, corporate income tax and indirect tax rates are relatively high and noted that low revenue effort could not be blamed on the tax rates. Rather, the think tank was of the view that, the problem lay with the huge tax revenue losses through various channels along with inadequate coverage of the tax system and administrative lapses.

It mentioned harnessing resources from the extractive sector; halting illicit financial flows such as trade mis-invoicing, transfer pricing and various forms of money laundering; tax exemptions where Ghana reportedly lost revenue annually in excess of GH¢6-7 billion (or over US$1 billion) in the form of tax exemptions; property taxes, a potential pool of revenue that could be tapped given the sprawling mansions in the urban areas; tax evasion/noncompliance; tax fraud/corruption; tax administration inefficiencies; informal sector taxation where the informal sector accounts for 30 per cent of Gross Domestic Product (GDP), yet a large part remained outside the tax net among other things, as some of the critical areas the government needed to watch in the 2022 budget.

The International Monetary Fund (IMF) has in recent years described Ghana as having “a high risk of debt distress”. This is because as at the end of July, the debt was reported to have reached GH¢335.9 billion (or 76.4 per cent of GDP). The debt situation has been compounded by the effect of exchange rate depreciation on the debt, mainly considering the external component. This has been aggravated by the financial sector clean-up and COVID-19 related expenditures. With the debt to GDP threshold for Ghana as a lower middle-income country pegged at about 70 per cent, the current state puts it in unsustainable levels and that is a concern the experts will address bearing in mind the threshold that has already been crossed.

The Head of the Department of Research at the Kofi Annan International Peacekeeping Training Centre (KAIPTC) in Accra, Dr Emmanuel Kwesi Aning, last week expressed concern about the high unemployment situation in the country while being interviewed on an Accra-based radio station.

According to him, the unemployment situation had reached a stage where the various forms of crimes such as kidnapping and killing for ritual purposes among other things was pointing to the desperation in the system.

He lashed out at politicians who he claimed only promised goodies for the youth just to win power and yet implement no pragmatic plans to create opportunities for them to be engaged in employment.

According to the IEA , growth had been largely concentrated in the extractive sectors because they were highly-capital-intensive, did not create many jobs, hence the need for the government to focus on the real sectors to create opportunities for employment.

It is expected that the meeting will offer panellists and discussants, the opportunity to proffer solutions that can help the government to overcome the challenges and restore hope.