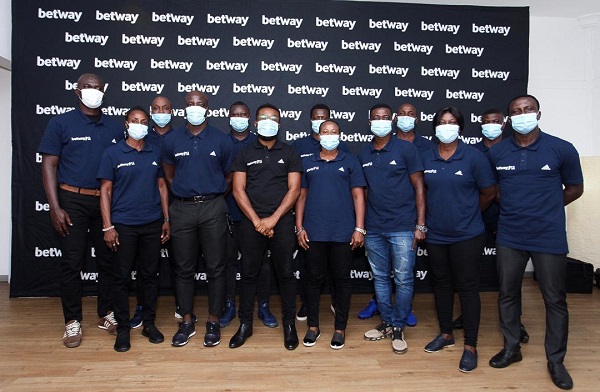 Ten former professional footballers have graduated from the Betway 12th Man Programme, a special initiative targeted at providing them with entrepreneurship and sport management skills.

The 10 professional footballers, including the 2003 African Women Footballer of the Year, Adwoa Bayor, former Olympiacos star, Peter Ofori-Quaye, and former Anderlecht and national U-17 Starlet, Awudu Issaka, passed out of the five-month training programme last Saturday in Accra.

During the four-month training, the participants were put through their paces by consultants, including the Sports Writer’s Association Ghana President, Kwabena Yeboah, Ghana Institute of Management Professional’s Senior Consultant, Patrick Andoh, as well as iSpace Foundation’s CEO and cofounder, Josiah Eyison.

“Targeting ex-Ghanaian footballers, this initiative was set up to expose the legends to a variety of skills and qualifications to help increase their chances of employment. We are happy to see our legends use the knowledge from the Betway 12th Man workshops to contribute to change in their local communities. We will sustain this initiative as we believe more lives in our communities will be touched as we empower our former football heroes,” Mr Oppong-Nkrumah said.

As part of their graduation ceremony, the legends received accredited participation certificates for the various workshops.

One of the beneficiaries, Awudu Issaka who runs the Royal Awudu Issaka Soccer Academy stated that the skills he had acquired during the course of the programme will come in handy as he strives to move his club to greater heights.

He said the knowledge received has given him the confidence to continue working hard to develop Ghanaian football.

“This programme has been fantastic and impactful for us all, we feel privileged to have been the first selected legends for the programme and appreciate the recognition Betway has given us for our past achievements. We will now go back into our communities and start contributing to the change we have wanted to see in the football – on and off the pitch,” said Awudu.

Betway Brand Ambassador, Stephen Appiah, who played a key role in selecting and mentoring the legends, said the programme was a great success and its positive impact would be felt on Ghanaian football in the coming months.